The Northern Wall was a barrier constructed in 898 AE to halt charr incursions into the heartland of the human-controlled Ascalon.[1] Though several cities stood to the north of it and quickly fell to the charr offensive, the majority of the kingdom was protected. However, the Searing allowed the charr to raze the human kingdom without ever crossing the wall. With the Ascalonians weakened and the Wall breached in some areas, the charr gained the upper hand in the long-standing feud between the races.

Parts of the wall still exist in Ascalon today, overgrown by 250 years' worth of plantlife. The Ascalon City Ruins, now controlled by the ghosts of Adelbern's guards, is situated near its center. 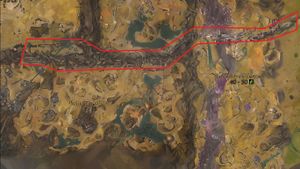 The Northern Wall as it appears on the world map.