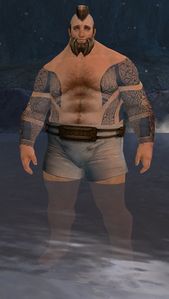 Burrisson the Blue is half-naked norn at The Shadowhorns. Characters must speak to him, then defeat him in combat, to earn a hero point.

I follow a two-part spring strategy. I sit in the steaming waters and let them soak into my pores. Then, I get out in the cold, and fight something. It keeps me young. Come here and let me fight you. You'll see my wisdom.

I'm ready when you are.

Not a good time.

Ahhh, you put up a good fight! I'll need an extra soaking after that. Make way for the killer whale, tunas!

Section-stub. This key section of the article is incomplete. You can help the Guild Wars 2 Wiki by expanding it.
Reason: Where in the above dialogue does the following go?

(With The Minstrel III: The Bard active)

That's a catchy tune you're singing. Mind if I write it down?

When approached by a character who has not completed his challenge
Splish, splash. Four norn in a bath. (hum)

When becoming hostile during his event
Water washes the surface. Battle alone and cleanse your insides.

When he is defeated
There, now you're truly cleansed. Back in the steam with you!