In the process of "clearing subobjects" in Guild commendation trader everything under "Items offered" disappeared, leaving only the header. Is this what you wanted? ~ 1Maven (talk) 20:43, 29 June 2015 (UTC)

Partly. I was going to restore it immediately, but then realised it was using the wrong template (the sub-template doesn't handle "no subobject" param). It should be fixed now. --BryghtShadow (talk)

Hi, I'm looking at Template:Level rewards table row/11 + thinking it would probably be a good idea to add the profession icons before the unlocks - purely in case they vary between professions. Could I ask you to add which prof you used? -Chieftain Alex

thanks for that - also there isn't a need to blank pages with SMW before moving them anymore, that was fixed ages ago -Chieftain Alex

Awesome job with the additions to Tour Guide! It's that kind of in-depth information and attention to detail that really sets us apart from other fansites. Please keep it up! - Felix Omni 05:47, 15 July 2015 (UTC)

Hi BryghtShadow, I'm wondering why you added this bit of code to the {{item stat lookup}} template? I'm temporarily reverting it because it doesn't take shields into account (thus making all defense values for shields equal to ? in the infobox ><) - but if you explain what you're trying to achieve and why then we can reimplement it in a different way. Thanks. -Chieftain Alex

Ah shoot... >_< I shouldn't have touched it. So I was trying to have the template "do nothing if no valid armor type". Currently it uses missing templates for invalid inputs of armor weight (i.e. not light, medium, or heavy) and armor type (ie. boots, coat, helm, leggings).

It's my attempt to make the template more secure against invalid inputs, but I messed up the logic badly. --BryghtShadow (talk) 00:41, 20 November 2015 (UTC)

You trust in game stuff yet you don't trust the minimap? Furthermore, if you insist that the big map is true, then it should be Tarir\nThe Forgotten City. Linebreak instead of a comma. 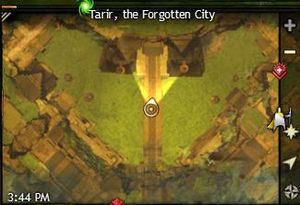 Precedent is to follow what's displayed on the big map, not the minimap: Malchor's Fingers. (There's at least one other sector with the same discontinuity, but I can't remember which one. (HAH, I said exactly the same thing on the talk page there!)) —Dr Ishmael

Was it Canal Ward, by any chance? So... if we're going by world-over-mini, and world is missing comma... "Tarir<br>The Forgotten City", but because newlines are like spaces (e.g. "Eastbluff\nWatch" close to Tarir) it'll become "Tarir The Forgotten City"? O_o --BryghtShadow (talk) 18:04, 28 November 2015 (UTC)

No, because that was just renamed a few months ago; this other sector is something that's been in the game since release, same as Malchor's Finger(tips). I'd actually support changing our standards to match the API, though. —Dr Ishmael

I'm betting it's Treacherous_Depths, which does suffer from that same naming inconsistency. Mini-map calls it Iwrin Isle, which is the name of the isle within that area. Edit: I'm not too fussed about this, hence why I bring it up here and not somewhere more prominent. But typically people look to that big ol' map and will edit per that. The API tells us that Mount Maelstrom and Sparkfly Fen are in a region called Steamspur Mountains and The Grove, Rata Sum, Caledon Forest, Metrica Province and (I think) Brisban Wildlands being in a region called Tarnished Coast. And while this is geologically correct to the lore, every achievement - such as daily achievements, or the explorer achievements - which makes it easier for wiki editors to just go and list it on the wiki as Maguuma Jungle (what those achievements - what everyone will see more than the API - lists it as). THen there's those three cases (and no doubt many more) where area names don't match between world map and mini-map - and the mini-map no doubt reads what you're reading on the API. Konig 02:27, 29 November 2015 (UTC)

Yes, that's the one - it's hard to remember because the names are completely different.
The in-game achievements trump the API on region names, of course. But for sectors, especially the two where they're only slightly different, I think we can get away with using the less-visible form. —Dr Ishmael

The order the achievement subobjects are defined on the page are completely arbitrary. Why would we want to sort them that way.--Relyk ~ talk < 02:19, 9 December 2015 (UTC)

All the other blueprints have redirect to those pages. See Guild Catapult Blueprint. Should i change all those pages to this style? We would also need to split recipe to that page to then and not have all useful information in one spot.

I understand, but all the other pages were made one page to have all the information together. I do believe it needs to be consitiant and have them all have 3 pages or all have 1. (Sorry I am still new to helping with the wiki, was just upset how little info there was with guild upgrades) Deloiss (talk) 03:21, 20 December 2015 (UTC)

Well, I hastily reverted the redirect because I felt that the 2 guild blueprints are quite different. The yellow icon blueprint (basic rarity) is created via the guild storage (double-click to "withdraw") while the blue icon blueprint (fine rarity) is created via scribe 300, and if I recall correctly all scribe blueprints go into the processing line in the guild hall, and I believe this gets put into storage once done..? --BryghtShadow (talk) 06:01, 20 December 2015 (UTC)

Yes, once a guild blueprint is scribed it is put into a guild storage as a blueprint that must be used at the table (and wait 24h). Then it will be put into the guild inventory till someone activates it and revives the rare quality item item. It is not possible to have that item in your invitory which is why the other ones all linked back to useable item page. Otherwise we will need to change all of the other seige pages and moved the scribe crafting recipe to that page.Deloiss (talk) 15:51, 20 December 2015 (UTC)

Mainly laziness to request. I did consider requesting editorship, then I was like "I'll do that later and write down the info for now. If someone hasn't gotten around to fixing the page, then I'll have a go at the request". :P --BryghtShadow (talk) 18:24, 29 February 2016 (UTC)

Thanks for the corrections on that, I vaguely remember noticing that oddity before making the page and completely forgot. Also, apologies for editing amidst your edits, thought you had missed it. And finally... what the heck kind of a name is Seax, and why the hell is the dagger item not called Seax? I could go to anet for answers, but I expect you to answer me in full! -Darqam (talk) 21:35, 29 June 2016 (UTC)

I didn't encounter edit conflicts, so don't worry about edits amidst my edits. w:Seax is Old English. As to why the item itself is not named Seax, "Nothing is off the table", and that includes inconsistencies! \o/ At least we don't have to use disambiguation. Unique names for everything! --BryghtShadow (talk) 21:56, 29 June 2016 (UTC)

How do you even ID?[edit]

So you did this edit, yet at the moment of me typing this, the API entry does not even exist yet. So do you have some magic mojo going along or do you have access to the item? Either way, if you have some black magic, I want to know what it is and how I can use it. -Darqam (talk) 15:59, 6 July 2016 (UTC)

Oh wow, you are much more dedicated to that than I am... I did never think about that though, might be fun to play around with. Do you do the conversion manually or use a specific tool? -Darqam (talk) 19:23, 6 July 2016 (UTC)

I'd guess that he made up a script, but if you're a masochist and want to use the wiki templates to help, you could paste numbers out of excel (easiest way to make a column of ascending numbers):

I used to do this by opening an article for edit, altering the id number there and copying out the tag. Waaaay too easy to save it though and cause problems XD Eventually I went on to the Excel method; thus how I started IDing a bunch of still unspawned legendary collection items and PvP weapons. SarielV

Ah, I've used that method (of altering ID and previewing) a few times myself. The downside though is waiting for the preview and consuming some bandwidth in the process. :) --BryghtShadow (talk) 15:38, 11 July 2016 (UTC)

Not even close to getting to that collection so I'm not sure I can check, but is the Forgotten Pillar an actual object? If so, regardless of directions-being-elsewhere, it deserves its own page. Just vastly different set-up (Object infobox, location, dialogue if viable, and link to Forgotten Treatment). If it's just a 'walk to this location and poof you got the item' with no object interaction, then it should be deleted, yeah. Konig 05:31, 20 August 2016 (UTC)

Hmm, I'm not at the collection step either. Can confirm without collection that it's not an object (went there and could not see any yellow text or change in cursor). Cannot confirm if it's a "usable" object with collection. --BryghtShadow (talk) 05:40, 20 August 2016 (UTC)

I completed Nevermore and those are the instructions for getting Forgotten Treatment. If anything waterfall is falling on a pillar, but it's not a selectable object. It can go. - Doodleplex 06:01, 20 August 2016 (UTC)

Some missing base ingredients lookup[edit]

Template:Base ingredients lookup The example on this page works fine, but I can't figure out how to get something like this[1] to work in a table. pls help am wiki idort Towelcat (talk) 07:35, 14 October 2016 (UTC)

Hi there BryghtShadow. I know it's been a while, but on November of 2014, you added a Whispers Recruit to that story step. I've searched everywhere for that NPC, but I could not find it. Since you noted it's a charr, I'm sure you were confident that it exists or existed. Do you perhaps remember where it was? —Ventriloquist 14:05, 19 July 2017 (UTC)

Given the whisper agent Salutes the PC, maybe this is also based on story choices? Perhaps you need to have done OoW? -Darqam 16:31, 19 July 2017 (UTC)

Heya, sorry for the late reply! Since it's almost 3 years, I really don't remember. Revisited the instance today and I could not find any "Whispers Recruit". Only NPCs with "Recruit" in their name are "Vigil Recruit", which I have a feeling that it was a typo of. There's the male charr Vigil Recruit by the portal to Brisban. --BryghtShadow (talk) 11:25, 27 July 2017 (UTC)