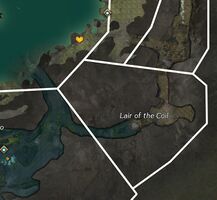 Map of Lair of the Coil

Lair of the Coil is a cavern inhabited by Cave Trolls in the southeast of Timberline Falls. It can be reached by heading east from

Coil Waypoint — into the Tail of the Serpent area, then heading south up the ramp. At the western end of the cavern is a long drop into the water filled cavern below, where a school of barracuda have made their home and where a large skeleton (probably of a troll) can be seen.

The underwater cavern continues west and exits into Mellaggan's Grotto (the passageway can be reached from the west but is difficult to see due to being hidden behind large kelp plants). Partway along the underwater cavern there is an above-water cave where a friendly Crazed Quaggan is trapped, together with some rats he's been forced to eat.

A group of quaggans can be found standing near Nonmoa Lake's southeastern shore and can be assisted to investigate this cavern as a suitable home.