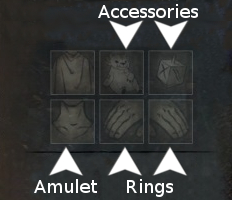 Trinkets are a category of equipment that may account for roughly 40% of the benefits given by equipment. Unlike armor, they do not affect a character's appearance. Although they are not part of a character's starter equipment, trinkets may be acquired beginning in starter areas as loot, personal story rewards, purchased from vendors, and bought or sold on the Trading Post. They may also be crafted by jewelers and transformed in the Mystic Forge. Trinkets have one upgrade slot that can accept jewels or universal upgrades.

There are three types of trinkets: accessories, amulets, and rings, which differ in the magnitude of the attribute bonuses they grant. Equipped trinkets may be displayed using the equipment tab of the Hero panel. Hovering over an empty slot will display its type. Hovering over an occupied slot will display the trinkets characteristics. A character may wear up to two accessories, one amulet, and two rings at a time.

Ascended trinkets are roughly 5% more powerful than their exotic equivalents and usable by level 80 characters. They use different mechanics:

Anomaly:
The slot for the back item is grouped together on the Hero panel with trinkets, and can accept upgrade components intended for trinkets. However, the game considers them a unique category of their own which is closer to armor, since they can be reskinned via the wardrobe.
Retrieved from "https://wiki.guildwars2.com/index.php?title=Trinket&oldid=2598504"
Categories: