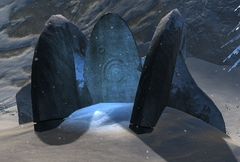 The Jotun Worship Stone is a stand of stone monoliths, an ancient and holy relic to the jotun. It is said that its power judges all who touch it, which occurs in the form of having to fight the ghost of Elder Thruln, the last of the giant-kings, to prove your worth; failure resulting in death. However, only those who touch the stone see what occurs.

Jotun in the Osenfold Shear come to Haivoissen Kenning to visit this site.

Power emanates from the jotun worship stone, yet it doesn't respond to touch.