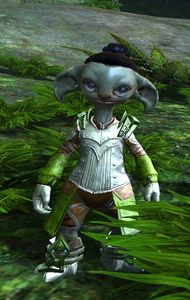 Demolitionist Tonn was an explosives expert that joined the Pact after the events of Claw Island. He is married to Ceera, a medic who similarly joined the Pact, though she wanted to teach in Rata Sum. As member of the Pact, he was their top demolitionist and had taken on a human apprentice, Poul Strixel. Very enthusiastic with his work, Tonn worked on the front lines arming his explosive devices. He loved making small jokes, and had a very positive attitude despite his occupation.

He was joined by the Pact Commander for a series of missions focused on weakening Risen presence along the eastern shorelines. Together with Crusader Gutfire, Tonn and the Commander destroyed three Risen Guard Towers that had been flooding the shorelines with risen. Later, after obtaining materials for an improved explosive, the pair joined with Crusader Gilley to destroy a large bone ship. The Commander and Tonn had placed the charges on the bone ship, but upon returning to the detonator discovered that something had went wrong with the connections. Tonn volunteered to swim back and check, giving the Commander and Gilley the task of defending the detonator from swarms of risen krait. An all-clear signal was given when Tonn was done, however after the explosion he did not return. Swimming out into the water, the Commander and Gilley found Tonn's body floating in the water, having been too close to the explosion.