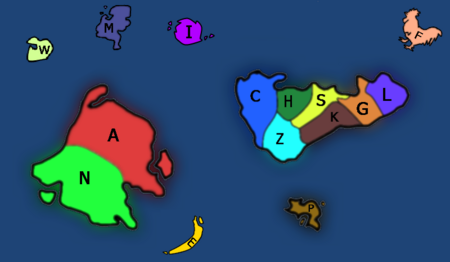 Current Situation of GW2W Territory - Map will be updated every week or so dependant on new club formations. More islands could be added. Signed; The Cartographer

The Map hasent been Updated since A and N had equal members.Stop saying it whic Naut is (Hopefully) working on a new map.k? --Neil2250

Map finished, P territory shrunken due to size, A have been given more land. A-Team and Club N have received "Nationlist Islands". Do with them what you wish ;). Clubs are welcome to make their own territory maps, but must been consistant with their shape. Also Names have been added for the eye impared :)--

Also, Naut we need a bit of an Island extention since Nalana(afk master) is now part of the crew, K? --Neil2250

Feel Free to Add your Parts of the Land,ive left 2/3'rds for you two to build bases and kindly keep the main picture big so every detail is fine <3

I WAS WORKING ON THAT, WHEN YOU GO AND BLOODY UPLOAD IT D:. Tbh, mines more detailed. So i'll just add your bits to mine xD Naoroji, hurry up and design your bits. -- 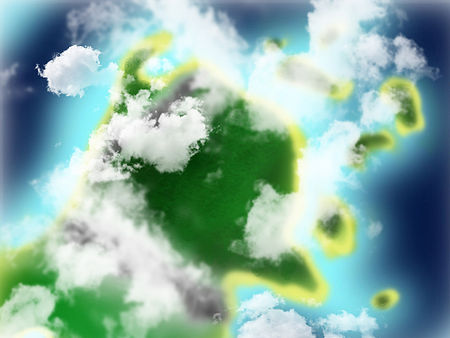 Here is a distant overview of the Empire of A. You can see there are many small islands along its coast, most of which are not found on maps. Adonis Isle is put on maps solely because it is the host of the capitol, where Empress Adamma III resides. Although the Empress' palace is located on Adonis Isle, she grew up on Ascension Isle, located northeast of the mainland. The NAuticus mountains divide the Empire of A from the Lands of N. </roleplay> hehe what do you think, guys? ^_^ Does it work? --Amannelle

Why was I not informed of this new discussion at once :P???? Aquadrizzt

Lol it was very obvious when it first continued lol we practically spammed the RC. ^^ I would LOVE to join the roof runners, but I was never invited... o_o --Amannelle

You are indeed invited.see my navbar for this.--Neil2250, The Deleter

Yay! ^_^ Hehe yeah, in the interviews they mentioned they also wanted to cater to "explorers".... yeah that's kinda me lol. --Amannelle

How does one get aboard? Alfa-R

C-team have resigned. Game is over. -- Cyan

The borders of Celeria are open again for trade and tourism. Because of this new position on the world, a map will be (eventually) created for the people who want to experience the celestials lands of Celeria. -- Cyan

My island is actually the shape of a banana. Eive

You're stuck with Knighthonor. Ha. Eive

I think Konig might have renounced his citizenship :S Aquadrizzt (talk)(contribs) 03:54, 9 November 2010 (UTC)

Lmfao 4 years on this wiki and I'm just discovering this now? I would have created a whole map of L. At the time I might have even used the AoE II expansion map editor to add the details. Haha guess I'm a little late to the party. Lysander (talk) 03:30, 25 July 2015 (UTC)

The Ps, being a peaceful kind, would like to let the cartographer know that our humble brethren, the Ms, were excluded from the most recent map. Thank you for your understanding. --

I'm a little surprised at you, Naut... forgetting your own alphabetical neighbors in their own Map? --Amannelle

Finally i got my own island :D But i was not a problem Naut, just let them talk :P (My secret spot hasn't been found yet ^^)-- 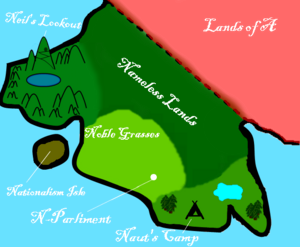 The lands of P offers 500 tons of Podocarp berries from the Paleobotany forest to the needy in the Nameless Lands, of the Lands of N. --

Say, can anyone with a N as their first letter join??--

Of course. Assuming you don't mind this entire page being dead. -

The people of P would like to present the rest of the lands with a map of P, for all your travel needs... in the lands of P. The Map of P --

We of the Elegant Land of E declare war on thou. Eive

The mysterious and questionable people of Q declare ourselves neutral but will sell supplies to the highest bidding land. - Lucian Shadowborn

Ooh, can I join? I'm not really sure what it's all about yet, but I like supreme submarines (we're talking giant sandwiches, here, right?).Silmalel

Obviously, the S-club is a Secret Society, Savagely Slaying Spies, So rule #1: You don't talk about S-club. Sjeng

I live on a big island, I Have yet to meet other since it so big and what I have been told by my elder, it is said that W island is shaped like shing jea island although it have been said were the reflection of M but bigger Tech Wolf 01:41, 13 July 2010 (UTC)

Here Thar Being Dragons...well, one really big-ass reality-warping at-least-as-powerfull-as-the-%@#$&-Gods dragon. And an army of Zojja's golems. Hmmm...I guess Zland is a WvW arena...? Zolann The Irreverent

Z is Recruiting! Name changes may be necesary :p Zolann The Irreverent

That's right, I went there. Guess what I found? Alot of mysterious fish right by the mysterious harbor on mysterious lane (situated right next to Mysterious town of Huh) - Lucian Shadowborn

The Y(ellow) club: We like Canthans. Yellow-fever is term used to describe those that like Asians even fiction ones in GW-lore. Our island is Miniture version of Cantha with its own emperor. Also the shape of "Y" can mean other things...but lets not go there...Yumiko ^,~ 16:09, 24 May 2011 (UTC)


Other Topics Under This Line.
[edit]

Okay, now I have to agree with Pling. This is really getting annoying. So either make less edits or go somewhere else please. poke | talk 19:53, 7 May 2010 (UTC)

Hey Poke, do you know if it's possible to make Wikia sites just for things like this? xDD --Amannelle

Poke, until games release, we are realy just playing tick tack toe and fixing case-sensitive races.we need something to do :/ , cant ya put like a 'Wont be included in RC.' tag on this with one of your super powers? o.o --Neil2250

On wikis there is, to my knowledge, not a way to not include something on RC, unless it's a bot edit. As to answer Amannelle, you can by owning your own domain and uploading to your wiki, but I do not think this is very tolerable on wikia. Ariyen 20:35, 7 May 2010 (UTC)

is this debate even about? I'm not feeling very bellicose, after all, people have last names, too. this just seems silly and completely irrelevant to the GW2 wiki in any way ПALANA 02:01, 20 May 2010 (UTC)

Oh, I'm sorry. Q_Q I clearly misunderstood... I've had a HORRIBLE day today, ended up bruised and sicker than before, and I came online and thought you were bashing me and everyone else, so I kinda blew up on you. D: sorry about that. --Amannelle

I thought you were getting on MSN today so we could play some AoE II, Matt,... D: Be sure to come on tomorrow, want to know what's up. --Naoroji

A bigger M-land, since me and Mann now live in on a 1 man-island and want it to be shaped like Holland, well just use dams and dikes to make it bigger! I also think that there are some other lands that need resizing, due to earthquakes or new settlers... Just a kind suggestion though :)--Mark,

K club is bigger then n club now so i dont think n should be bigger o.o--Angelkiss