This article is about the NPC. For the attribute combination "Tizlak's", see Commander's.
Stub. Key elements of this npc article are incomplete. You can help the Guild Wars 2 Wiki by expanding it.
Reason: Expand biography. 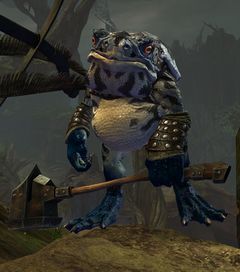 Just as the jungle provided the strangers to us, she now provides us to them.

Tizlak is a Nuhoch hylek originally found in Verdant Brink helping out the Jaka Itzel, and is later found back in his home village of Teku Nuhoch in Tangled Depths.

To fight our Zintl enemies, we hope to cultivate fighters of our own from a precious clutch of giant beetle larvae.

Our beetle larvae are not yet a match for the Zintl's battle beetles, and our resources are stretched thin.

If Lure the beetles near mushrooms to calm them by releasing spores from nodules, Take the young beetles on their first chak patrol or Slay the Malignant Chak Blitzer is occurring

Our young fighters need guidance before they can realize their battle potential and protect our village.

If the meta is complete

Our beetle patrols safeguard the village. Morale is high and industry has returned, all thanks to good people like you.

If King of the Jungle is occurring

Your Order of Whispers allies hope to power their weapons with energy stolen from the chak. Their plan will fail without support.

In Verdant Brink, before completing The Jungle Provides
Tizlak: Please stand back. The jungle is full of threats, and I can't afford to be distracted.

In Verdant Brink, after The Jungle Provides
Tizlak: Good luck with your mission, Commander. I'm headed deeper into the jungle myself. My people need me.
<Character name>: Thanks again, Tizlak. I hope to see you again soon.