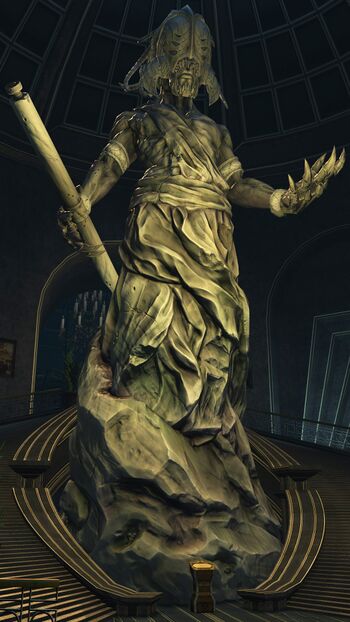 A statue of Abaddon.

A statue is a sculpture made from a lasting material, representing one or more people or animals, normally full-length, and at least close to life-size, or larger. Most statues are constructed to commemorate a historical event, or the life of an influential person, or as the centerpiece of a shrine of worship. Statues are often considered public art and are often found exhibited outdoors or in other public locations.

Most statues found throughout Tyria are Static Interactive Objects and the players can have but limited interaction with them. There are a few notable exceptions to this:

These statues play a key role in certain Renown Heart or Event. The player is required to attack and therefore destroy these statues. In some cases destroying the statue will be all that is required to complete the mission, at other times their destruction will add a percentage to the missions completion. Some examples are:

Throughout the Ruins of Orr there are statues of the six human gods which have been corrupted by Zhaitan's influence. Each statue has an AoE (Area of Effect) status that negatively affects players if that gods respective temple is not in the players control or if said temple is contested.

These statues are used by players in the Mystic Forge and are required in the forging of certain legendary weapons. Some examples are: