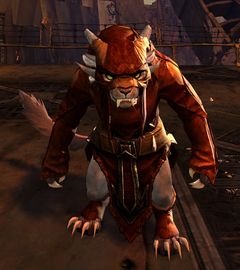 When I walk a few paces behind, they don't suspect I'm drawing a target on their back.

Sicaea the Shrouded is an Ash Legion spy who is in Tribune Torga Desertgrave's warband.

Sicaea worked as a member of the Ash Legion and infiltrated the ranks of the Flame Legion to keep an eye on them as they did not suspect female charr like her for being spies. When questioned by her fellow Ash Legion soldiers, she would claim to be in Tribune Torga Desertgrave's warband.[1]

In 1325 AE, Sicaea was observing Flame Legion spies at the Serrated Blade Tavern and met with her contact, a recently promoted Legionnaire of the Ash Legion. The pair managed to learn a password to a nearby Flame Legion camp from the spies and defeated them in a local hideout to hamper enemy operations in the area. They also found out that the Flame Legion had been covertly killing workers and submitting their own as replacements to infiltrate the Black Citadel. While the Legionnaire delivered the news to Torga, Sicaea stayed behind to hide the Flame Legion bodies.

By the time the pair returned to Torga's office, they saw her arguing with Tribune Rytlock Brimstone who demanded an explanation for missing Blood Legion soldiers. Torga was not willing to share any intel with Rytlock, however, and told him off as she wanted the Ash Legion to settle the matter without interference. Having witnessed the argument, Sicaea felt that it was a mistake not joining forces with the Blood Legion for the operation as their combined strength would ensure success; however, she respected Torga's wishes and did not argue with her.

The Legionnaire eventually infiltrated the Flame Legion camp and returned to the Ash Legion with both the freed captive Yahuk Fellstrike and troubling news: the Flame Legion were planning to send disguised agents to trick the Blood and Iron Legion, making each legion think the other had attacked them and lead to a battle between the two legions in order to weaken them.

Sicaea recognized the notorious Flame Legion spymaster Trybulus Griefblade's name from the Legionnaire's report and wanted to warn Blood and Iron about the attack, but Torga forbade her. Instead, the tribune wanted the mission be finished the Ash way and ordered her aide Fengar Cruelmane and the Legionnaire to take on different objectives. Worried about playing into Trybulus's hands, Sicaea pointed out that Fengar was not experienced enough for such a dangerous operation and volunteered to go herself, but Torga ordered her to track down Trybulus instead; according to the tribune, Fengar would finally get a chance to prove his skills on the field.

Later, Sicaea's contacts informed her that the Flame Legion had captured Fengar during the mission and tortured him to death for information. Wasting no time as she realized the Flame Legion would use Fengar's intel to act against Torga, Sicaea decided to ask Rytlock for help and got with him to the Black Citadel just in time to witness Trybulus's agents ambushing the Legionnaire's party. After defeating the assassins, Sicaea told the Legionnaire what she knew and suggested they meet at the ruins of Rin where the Flame Legion were mustering their forces. The Legionnaire then asked Rytlock to gather a strike force as backup.

The Legionnaire, their sparring partner, and Sicaea tracked down Trybulus's second-in-command, Flame Centurion Kagaar, and defeated him to acquire a magical trinket which they could use to enter the magically shielded hideout. While inside, they encountered Trybulus himself who was surprised to see the Legionnaire alive. Before Trybulus's forces could overwhelm the trio, however, Rytlock's reinforcements arrived to even the odds.

Although the party managed to save Torga, Trybulus escaped in the ensuing chaos. Torga had overheard that Trybulus had another hideout at Igni Castrum, however, and suggested the Legionnaire search for him there. Sicaea took the tortured Torga back to the Black Citadel to recover. Before leaving, however, she lamented Fengar's death and asked the Legionnaire to make Trybulus pay for his crimes.

Sicaea eventually learned about the Legionnaire successfully defeating Trybulus and ending the spymaster's schemes once and for all. Although the Legionnaire would be promoted and eventually join one of the three orders, Sicaea encouraged them to continue on their path and expressed hope that the two of them would work together again someday.

To Ash Legion charr (after joining an order)
Good to see you again, <Character name>. Keeping yourself busy, I trust?

Absolutely. The Legion has plenty of killing for all of us.

Ha! I knew you wouldn't sit around bragging about Trybulus when there were fresh targets to be had. Keep up the good work.

I am, but it's not as much fun without you backing me up.

Well, I'll have to put in a request to Tribune Desertgrave, see if we can't partner up again. May not happen for awhile, though: she keeps me pretty busy, too.

If and when it happens, I'll be ready. Until then.

Damn right. A few more notches on my weapon and it'll be full.

Outstanding. Add a few more for me, will you?

You know it. Good-bye now.

Speaking to her a second time in the same instance
I'd better get back to work. I've got important things to do and important people to see...but not be seen by, if you know what I mean. See you around.