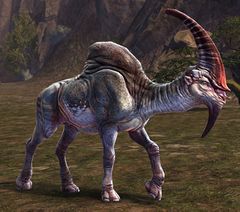 Shadhavars are large animals found in the Crystal Desert. They have a large horn on their head, and a hump on their back. So far two color varieties have been observed, golden gray and blue gray. The blue gray variant generally has a more spotted pattern compared to the golden variant, which bears more white stripes on the back of its hind and front legs.