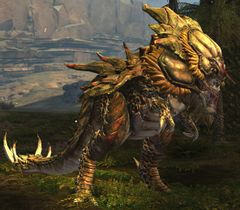 Elite Stonehead are powerful versions of stoneheads. They can be found in events that occur in Heart of Maguuma if upscaled.