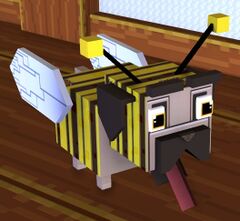 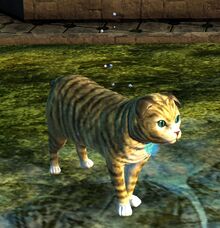 Appearance in the home instance.

The "Cat" is a seemingly bug-like creature in Super Adventure Box, located on the top level of the gong puzzle pagoda after the 9th checkpoint in Pain Cliffs. It can be fed a Piranha in Infantile or Normal Mode as part of the hungry cat scavenger hunt.

Make your way to the ninth checkpoint, making sure to clear out all of the assassins and toads from the seventh to ninth checkpoint, as well as in the pagoda where the cat can be found. Backtrack in the direction of the seventh checkpoint by using the pillars and then jumping down to the clouds halfway on the right hand side to return to the large pagoda with the pools of Piranha at its base area.

Grab one of the Piranhas and make your way back to the ninth checkpoint, but as the Piranha will break free from the player's grip after being held for 8 seconds, it is recommended to manually drop the fish and pick it back up every 6–7 seconds to avoid losing the fish in midair. Additionally, players can use the clouds upon returning with the fish, which may prove easier than having to constantly drop and pick up the Piranhas again and again if jumping from pillar to pillar.

If you do not have Piranha
This looks like some kind of bug. It seems low on hearts.

If you are in Tribulation Mode (see notes)
This oddly named character seems awed by your super-adventuring skills and refuses to take your hard-earned items.

If you do have a Piranha
This looks like some kind of bug. It seems low on hearts.

No, cat. This is for a giant octopus.

After feeding it
Woof.

Good cat, or whatever you are.