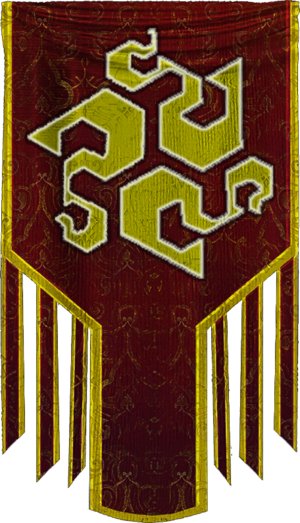 Banner of an independent Amnoon, under the council.

Our council's kept this city free all these years—why would they betray us now?

The Amnoon's City Council is the main governing body for the citizens of Free City of Amnoon. They are seated in the Office of the Chief Councilor.

Little is known about the city's council before the Pact Commander's arrival at the desert in 1330 AE. According to the citizens of the city, the council kept the city independent for many years.

In 1330 AE, as the rogue god Balthazar’s arrival at the Crystal Desert threatened the local settlements, his army of Forged and other followers surrounded the Free City of Amnoon. The city was in grave danger, and the city's council had to either choose an ally between the Sunspears and Joko’s Awakened and Mordant Crescent, or simply remain independent and neutral. As the members of the council had varying opinions on the matter, the decision remained unmade until the arrival of the Pact Commander in the desert, when they were asked for their opinion on the matter by Chief Councilor Imann.

After the Pact Commander told Chief Councilor Imann their choice, she announced the final decision which varied based on the decision. Soon after, Amnoon would have Sunspears, Awakened or more Cavaliers respectively appear in the streets, enforcing the council's decision.

As a a brandstorm assaulted Amnoon, Chief Councilor Imann evacuated a number of civilians via an airship alongside Zalambur and the Commander's Krytan allies.

After the Pact Commander brought Gorrik and Blish from Rata Primus, the two travelled to Amnoon and continued their study on the Scarab Plague there, though some civilians overheard Gorrik talking about his work, and had him arrested. Before the Commander's arrival, he was on trial in front of the council, and was then released after the council listened to the Commander's speech.

After the trial, the representative of the council, Councilor Mayameen went to dock six to meet the Tyrian delegation ship. When the ship arrived at the dock, the councilor and the locals discovered in horror that the whole ship was infected with Scarab Plague, the war supplies were stolen, and all the people aboard were dead and awakened. When these infected Krytans walked down the ship, the Scarab flew off and killed many peole around, including Councilor Mayameen.