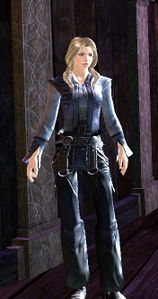 Ottilia is amazing... She's beautiful, and...not interested. But she helped me work through some angst about my family. My mom. I owe her.

Ottilia is a norn from Cragstead in the Wayfarer Foothills. Braham Eirsson had a crush on her although she rejected his advances and instead helped him work through some angst about his distant mother Eir Stegalkin. Braham learned that Ottilia and her family had been taken prisoner after the Molten Alliance's raid on Cragstead. Her fate remains unknown.

Ottilia was born in the norn settlement of Cragstead in the Wayfarer Foothills and grew up with young Braham Eirsson. She became the object of Braham's affections but rejected his advances. Instead she helped him work though some angst about his distant mother Eir Stegalkin and earned his gratitude in the process.[1]

In early 1326 AE, the Molten Alliance invaded Cragstead and overwhelmed the defenders. They took many norn as prisoners, including Ottilia and her family, transporting them to one of their hidden facilities to work as slave labor in the mines and to experiment on them. Upon liberating Cragstead with the help of the Pact Commander, Braham learned what had happened to Ottilia and swore to rescue her from the kidnappers.[1]

While assaulting one of the Molten Furnaces and liberating the prisoners there with help from Rox and the Pact Commander, Braham asked one of the norn prisoners about Ottilia. The prisoner hesitated in answering Braham, urging the younger norn not to inquire about Ottilia's fate when they all needed to escape from the Molten Alliance.[2] Ottilia was not among the prisoners whom the team liberated from the facility, and her fate remained unknown.

During the victory celebration held in Hoelbrak following the Molten facility's destruction and the liberation of prisoners, Braham attempted to write a love poem to Ottilia but found it difficult to express his feelings in the right way. In his poem, which he would ultimately discard and attempt to burn in the bonfire, Braham compared Ottilia's heart to an ice-covered meadow—beautiful but bitter.[3]

Speaking to Ottilia
I don't understand why we came back here. Everything's damaged. After seeing Hoelbrak, I can't imagine living anywhere else. It's so beautiful there, so vibrant and alive!

Isn't this your home?

Yes. But, if it weren't for Braham, I wouldn't be here at all. He found me, you know? No one has ever done anything like that for me before. He...he...he's amazing.

Conversation between Braham and Ottilia
Ottilia: I thought maybe...you know...we could go on a hunt together or something.
Braham: Uh...yeah, sure. So...what do you want to hunt? Jotun? Svanir?
Ottilia: Ooh, I know! I'd just love to have a new rabbit-fur vest. We could hunt rabbits!
Braham: Rabbits?
Ottilia: This'll be so much fun. I'll be ready at dawn tomorrow. See you then!

During Bazaar of the Four Winds[edit]

Conversation between Braham and Ottilia
Braham: I thought maybe, if you want, we could go to Wolf's shrine together today.
Ottilia: No, thanks. I went earlier and took all my gifts for Wolf then.
Braham: Well, maybe we could eat together this evening? The weather is fair.
Ottilia: I don't think so. I'm going with Ebbe. He's a merchant, and he sells furs in all the cities. What do you do?
Braham: I...what?
Ottilia: Exactly. Enjoy growing old in Cragstead like all the others. I'll send news of my travels. Promise!

Speaking to Ottilia
Did you hear? I'm going to Hoelbrak with this merchant I know. He travels the world.