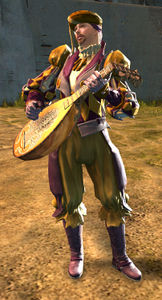 At the last minute, they pulled the old switcheroo on him. Brought in some mesmer to fill his spot.

Maklain is a minstrel found in Meddler's Summit in Cursed Shore where he was abandoned by his party. He plays songs to people passing by although the Pact soldiers view his loud singing so horrible that it could raise the dead from their graves.

Maklain claims to have performed in the finest courts of the land. In 1325 AE, he attended a party at Minister Caudecus's manor where he sang to Queen Jennah, only to see the party interrupted by an attack from the Separatists. He later appeared in the camp of Meddler's Summit during the Pact's invasion of Orr and claimed to have traveled there of his own accord to spread word of his prowess.

However, the Pact soldiers in the camp suggested another reason for the minstrel staying in Orr. According to Einar, Maklain had once been on the brink of fame with a lead role in a big production but had been replaced by a mesmer at the last minute, and the rejection by the industry he had loved had left him bitter. Despite his bad streak of luck, Maklain continued singing songs to unappreciative Pact soldiers and even taught would-be bards the Minstrel's Song.

Welcome traveler, to our humble encampment.

What's your story? Are you the entertainment for the camp?

I'm called Maklain. Surely you've heard of me. I sang for the queen at Lord Caudecus' manor once. Shame how that party ended.

Oh! I didn't recognize you in this lighting. Would you favor me with a song?

You flatter me, but I couldn't possibly. It would be too bright in a place so dark—blinding, even.

Please, just a few bars. It'd bring everyone such joy.

Well, I suppose I could sing a few bars, since you insist.

Music would be the perfect thing to lift spirits here. Please, sing for us.

I fear the joy of my song would seem inappropriate here. I couldn't possibly do anything unseemly.

A true master can lift hearts through song. I'm sure you can do as much.

It's true! I can do at least that much. Since you insist, I will sing for you.

I insist. Sing for us.

Bah! You may manage to caterwaul in some greasy tavern, but I've performed in the finest courts in all the land.

If you're so good, prove it. Sing for us right now.

I have a mind to put you in your place with some true artistry!

Glad to meet you.

True art must be unbound, free to travel where it will, or it is not art at all.

You expect me to believe your art brought you to Orr?

It was a good time for me to spread word of my prowess. My talents were desired by many, including some married to important people.

That's more believable. Are you really that talented? (Same as "What's your story? Are you the entertainment for the camp?")

The truth feels good, doesn't it?

With The Minstrel III: The Bard active

I have been inspired by you and would like to learn to play your song.

Of course! It's only a matter of time before the entire world longs to hear me play. (gives Learn the Minstrel's Song)