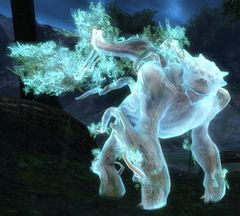 The Greater Wardbough is a powerful spirit summoned to the Eternal Pool due to the actions of the Vigil scouting party there.

Escort the Vigil squad to the ancient ruins (80)

Section-stub. This key section of the article is incomplete. You can help the Guild Wars 2 Wiki by expanding it.
Reason: Possibly missing more skills

Anomaly:
Killing the Greater Wardbough advances the Plant Slayer achievement despite being a spirit.