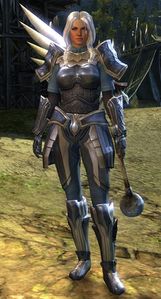 Wynnet Fairhaired is a high ranking member of the Durmand Priory; according to Scholar Prott, she is the master archeologist of the Priory. She has an extremely negative view of the Order of Whispers, considering them backstabbers, and the Vigil, thinking them as brainless warmongers. When the three largest Orders of Tyria joined forces to retake Claw Island, she leads the Priory's forces in the assault, and later becomes the liaison between the Pact and Durmand Priory.