Town Clothing was a system of casual clothing that people could wear out of combat. The system was removed with the April 15, 2014 Update. It was replaced with the Wardrobe System. Players can visit a Black Lion Trader (Armorsmith) in any major city to have their town clothes converted to items compatible with the new wardrobe. 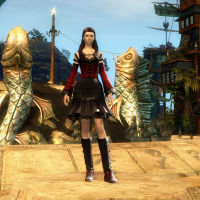 Town clothing was a set of equipment separate from armor and weapons that only provides a cosmetic appearance. Unlike normal gear, town clothing provides no defense or attributes. Town clothing can be switched to in the hero panel or by binding a key (default: unbound). In roleplay communities, town clothing may be pivotal to performances. Five slots exist for town clothing: headgear, chest, gloves, leggings, shoes.

Characters could also equip a toy that may provide costume brawl skills. Toys were turned into everlasting consumable toys when the wardrobe was introduced.