Not the best quality, but here are the icons for masteries on the level gauge and when one gains a mastery point. http://i1170.photobucket.com/albums/r523/TalysAlankil/Capture%20drsquoeacutecran%202015-03-03%20agrave%2017.37.17_zpsmplbxegw.png (Source). In case anyone can do something with it.

Hijacking section. We could do with the map icons for these masteries. Have we got those on the wiki already? -Chieftain Alex

I'll be adding screenshots here, use it wherever fitting. 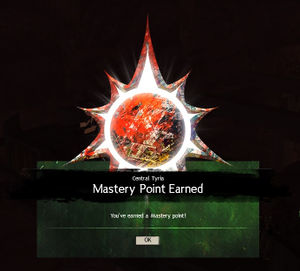 During this beta test I couldn't help but notice how much XP you need to level up masteries. I had Glider Basics levelled, and I noticed I need roughly 1kk experience to level Thick Wings. Unfortunately I didn't grab a SS during the test, I think it's worth to add "roughly 1kk" somewhere in this article though. – Valento msg 12:26, 27 May 2015 (UTC)

Wait, is this a scaling XP requirement per mastery point? Or is the cost per point constant, like the cost per skill point currently is? —Dr Ishmael

It seems to scale per mastery track. Each subsequent track requires more experience points, increasing by a currently unknown scaling factor (glider I to glider II is 4x more, for example, the former requires 254k exp and the latter 1016k exp). – Valento msg 14:26, 27 May 2015 (UTC)
Wait, there is a misunderstanding I think. Mastery points unlock mastery tracks, but you need to level that track with exp. – Valento msg 14:35, 27 May 2015 (UTC)

You're right, I see now - mastery points are not earned with XP, they're earned through specific actions. I think I got confused because you added the info about mastery tracks to the section about points. —Dr Ishmael

I always avoid creating new sections because I don't know if some information deserve its own section, that's my fault. D:
If you want, you can create a new "Mastery track" section with this information. Sometimes I just feel like my wording will look clunky and awkward. – Valento msg 17:06, 27 May 2015 (UTC)

Thanks for noticing that, the numbers on the page were from the last test weekend and maybe only for the gliding line. I'll get to adding the xp needed for each mastery later. Tyndel (talk) 08:23, 8 August 2015 (UTC)

While you are earning mastery points (the experience part of them), do you stop earning regular experience points? Daddicus (talk)

Are you sure about the spirit shards? Before HoT was released when skill points were split into spirit shards and hero points, I'd stopped receiving anything when I filled my experience bar at 80. Spirit shards did not inherit that feature of the old skill points. So are you saying that functionality was added back to spirit shards for those without HoT? --Cali (talk) 23:48, 12 November 2015 (UTC)

I believe I've been receiving spirit shards every time I fill the bar after level 80. I don't know when that would have changed, except apparently now with mastery. (Which absolutely sucks; how are you supposed to earn philosopher's stones and those other things?) Daddicus (talk)

This does not seem to be true, or the definition needs to be more specific. After completing (Tyria) maps, I did not receive any mastery points (I expected to get 1 after hitting 100% for a map). Am I missing something? Dracx (talk) 06:58, 14 November 2015 (UTC)

Slight misnomer in the article. It's rewarded for Been There, Done That achievement, which is World Completion, not Map Completion. And once per account. Konig 08:36, 14 November 2015 (UTC)

Comment in note: Experience received in WvW currently does not contribute to any mastery track, being therefore useless.

Experience (EXP or XP) and World Experience (WXP) are two different things. You can get both - oddly - in WvW. The former does help with leveling characters, but not in progressing masteries (similar to how the halloween areas functioned). Also, you sign your comments with four tildes (~) not four dashes (-) and you can remove the 'insert comment here' part. I moved the auto-signature to the end of your comment and deleted the template text for you. Konig 22:17, 25 November 2015 (UTC)

The statement that the Ancient Magics Mastery track is unlocked by entering any Season 3 map does not seem to hold true. There are posts that indicate that entering Draconis Mons does not unlock the track. I'm unsure about Lake Doric, as well. --Inculpatus cedo (talk) 20:23, 4 May 2017 (UTC)

Judging by this reddit thread, I'll go with the first 2 maps unlocking it. If anyone managed to unlock the track in other maps, add it in, but let's treat it as a whitelist rather than a blacklist.

"Your current mastery is fully trained"[edit]

One option might be to select a different mastery for your experience to be dropped into, though I can't guarantee this will work. You probably want to bring this up on the forums, as you'll get more people reading it, including the developers. G R E E N E R 20:40, 5 June 2017 (UTC)

But... I can't be the only one who has ever had that reminder annoy him? I tried Googling stuff like "mastery reminder" but nothing relevant immediately came up. I guess I'll try the forums or support if I'm really desperate to get rid of it (I mastered some other mastery that was fully trained, although I'm afraid I'm gonna see the same message again at some point) --92.218.161.104 20:56, 5 June 2017 (UTC)

To gain a Mastery you should pay attention to two different requirements that work in synergy. Neither will give you Masteries on their own. The second paragraph(*) of the main page tells what they are but not their interdependence.

Mastery points may be the easiest to gain thru places marked on the map as well as Achievements which can be tracked in your Hero panel. Once they are acquired you might still be unable to activate your chosen skill because of inadequate XP. Conversely, a filled-up "Mastery Training Bar" (still looks like the XP bar) cannot grant Masteries without the Mastery points being gained.

So work at these two together. I suggest gaining the Mastery points first (esp. when many are needed) and then working in the proper regions to fill out the needed XP. Of course, you should watch for things that give the most XP, such as Dynamic events and in some Zones, Renown Hearts which are renewed daily. --Gold Recluse (talk) 12:35, 9 June 2017 (UTC)

I have edited that (*)second paragraph to give a better, more complete description of the process for earning Mastery Points. --Gold Recluse (talk) 22:09, 17 February 2018 (UTC)

If there's anyone who has purchased Pah of Fire but not Heart of Thorns, do you have access to the Central Tyria mastery tracks? The official FAQ is rather unclear about this: "You must purchase Heart of Thorns to unlock and use the gliding mastery, as well as all other masteries introduced in and exclusive to that expansion."

The word "must" seems far from unclear to me. Official stances may change, if you're all right with waiting to see. As a comparison, I would not expect to find much use for Nuhoch Masteries in a desert. --Gold Recluse (talk) 14:51, 12 August 2017 (UTC)

Popup should be mentioned, since it's annoying as hell.[edit]

I just spend 100 Euros to be annoyed by a popup, so I'm not in a good mood. As this thread says: https://en-forum.guildwars2.com/discussion/8524/mastery-popup-will-not-go-away now that I own the expansions, I have theoretic access to Masteries - so I get an annoying popup "Hey, your mastery skill is finished, spend some points!" every few seconds. But since I don't have the required mission done yet (I don't even know HOW tf I should do that, it's not as if there is a pointer or something. "Heart of Maguuma" is a bit unspecific), I can't get rid of it it seems.

I had the same problem with constant pop-up about using Central Tyria's Masteries which were locked.

But finally I found workaround, I went to Guild Hall in Vabbi and in the area near it I earned few Path of Fire's mastery points. I don't know if earning points was needed, maybe you just need to go there - as in Domain of Vabbi there was no pop-up, so I don't know when exactly it unlocked, but at that time I checked panel for Masteries - and Central Tyria was finally unlocked, after using 3 point for 3 first level masteries, pop-up finally stopped appearing in Central Tyria.

Yep, the poupup is simply a bad design and people complained when Masteries got released (as can be seen on top of this topic), but nothing has changed since then. Txonä Atan - (talk) 15:57, 27 January 2020 (UTC)

What happens to XP if all mastery tracks are currently blocked by missing mastery points?[edit]

Are they lost? Are they kept and applied once a mastery is learned? Would be interesting. I might be able to answer it myself once I manage to get enough points, but I'm sure someone already knows it - that would be useful information, IMO.--Cyberman 18:31, 24 March 2018 (UTC)

Experience gain depends on the situation:
Not sure where it would be best to put this, so I'll leave it to others to add it where they think appropriate. Konig (talk) 18:56, 24 March 2018 (UTC)

I think the statements with the footnotes should be removed, or changed, as it seems some are interpreting AnetPaul's statements incorrectly. There is no sudden plethora of 'saved-hidden XP bar' Spirit Shards awarded when one completes all Masteries (in a region) after having acquired XP before spending the required Mastery Points. If there were, surely we would have seen players post about it...somewhere. Inculpatus cedo (talk) 14:36, 27 March 2019 (UTC)

I don't have any documented evidence (unfortunatelly I didn't pay attention at the time) but I suspect part of it can be true. A while back I had only 1 PoF mastery to be unlocked, when I finally filled and unlocked it and it was replaced by the "Spirit Shard bar" I noticed the exp bar was already ~40% filled. I just can't recall if I got a Spirit Shard right away or what not. Well, I'm near that situation again with having only Skyscale tracks to be unlocked, I'll try to watch it when I get to unlock the last track. --Txonä Atan - (talk) 11:49, 1 August 2019 (UTC)

I've gone through the situation twice now, and although one does receive XP for the current progress in a bar, one does not receive any 'saved or back-logged' XP. In other words, 'saved' XP is wiped out with each filled XP bar, and then starts over. No windfall in Spirit Shards, either. Inculpatus cedo (talk) 12:41, 1 August 2019 (UTC)

That 'hidden XP bar' is definitely not true, at least, not in 'all xp gained'. I didn't collect enough Mastery Points to finish all Mastery Tracks until just recently (pre-Dragonfall), and when I did, I didn't suddenly get several (would probably have been dozens and dozens) of XP bars filled. Nor was I suddenly showered with Spirit Shards. I think, at most, one receives credit for wherever the counter is in the current XP bar (as if it is keeping track, and restarting each time it gets to the end). --Inculpatus cedo (talk) 00:25, 19 June 2019 (UTC)

My experience is: EXP is redirected if there are other tracks unlocked. If there are only locked tracks that are not hidden you dont gain any mastery or exp progress. —Kvothe (talk) 04:19, 19 June 2019 (UTC)

I think the assumption it restarts and don't accumulate Spirit Shards could make sense. See my post on previous topic, I got the bar already filled so it got XP from somewhere. Maybe it keeps filling a bar but when it gets full it restarts without any reward so unless it doesn't get full that XP isn't lost. I'll watch out and try to collect an evidence next time I fall in that situation. --Txonä Atan - (talk) 11:54, 1 August 2019 (UTC)