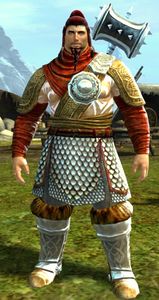 Fibharr Ygosson is a proud norn tournament champion at Kyesjard moot in Krongar Pass and well known traveler. He's friends with Vallus Smokemane, and is fond of saying "victorific", which he insists is a word if he says it is.

Fibharr and his friends challenges Trahearne and a Vigil Warmaster to a tournament match to see whether he would assist in retaking Claw Island. Upon losing, he agrees, and even works with the Pact in the war against Zhaitan later on in Orr.

If on or completed Follow the Trail
Spirits curse those ogres. If not for them, Vallus would have been here to meet you.

He and I will meet soon enough.

If have not done Follow the Trail
Come to hear tales of my great exploits?

Anomaly:
He doesn't have a cooldown on the line he speaks when talking to him, as a result, it is possible to continuously spam that voiced line.
Retrieved from "https://wiki.guildwars2.com/index.php?title=Fibharr_Ygosson&oldid=1920582"
Categories: