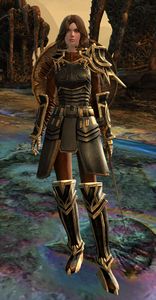 Eilye Jeyne is originally a Sergeant of the Ebon Vanguard. She joined the Pact via the Vigil to assist in the invasion of Orr, being given the rank of Crusader. In Orr, she assists in trapping Risen Dead Ships and securing them for a naval battle. After the death of Zhaitan, she is seen flirting with Benn Tenstrikes at the Fort Trinity celebration. They were both part of the Pact Fleet's assault on Mordremoth, but goes MIA after it was brought down.