I'm SHORTCUT EAGLE. I can fly you to a new location. — Shortcut Eagle 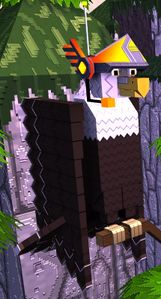 The Shortcut Eagle in flight.

I'm SHORTCUT EAGLE. I can fly you to a new location.

Shortcut Eagle is an ally found inside the Pain Cliffs in Super Adventure Box, who will allow the player to skip most of the level in Normal and Infantile Modes. It will dump you just outside the final checkpoint.

Shortcut Eagle is found part way through World 2 Zone 2, tucked away behind a large outcropping near a spinning flower. Keep to the right hand side after feeding the Octopus, looking for the spinning flower and a cloud. From here, you must carefully land a jump from the edge of a grassy hill near the spinning flower to the dissolving cloud to the other grassy platform. From there, use the Glove of Wisdom ability to push a block up to a nearby tree, and jump your way up to the Eagle.

Jumping off after a set amount of flocks of owls passed results in different zone progress.