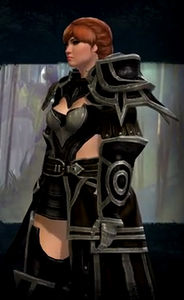 Warmaster Dalia Caisson is a member of the Vigil in charge of the Firebreak Fort who is concerned about communication issues affecting her troops resulting in Trahearne sending the Pact Commander to help. She wanted to help retake Claw Island but was unable to do so and is impressed with the success the Pact Commander has had at such a young age. However after things go terribly wrong, she releases the Pact Commander from active duty with her squad, though she does sends help to extract the rest of a Pact squad trapped in Mount Maelstrom. She is later informed on how a Risen mesmer named Labwan the Deceiver was to blame for all of the problems she was having as well as for causing the horrible incident involving the Pact Commander.