so Potato what should I do aggain? --

You? I was talking to "Nero". --AdventurerPotatoe

Ill officer you, you officer me.(i mean, when i cba to make an officer list)--Neil •

we should totally get more activity --

Goes to show that bookahs have zero organizational skills. Pathetic little-... (That is basically my first step into roleplaying for this guild! It's in-character. Ucco isn't very nice... But he'll still make sure to be a proper guardian! I am so screwed.) - Infinite - talk 23:50, 28 May 2011 (UTC)

Make it look more, um, something? ...AKA just get our members on there more. :P In some way... --AdventurerPotatoe

Great Idea :P ,I'll try to make the chat link look more Obvious and I'll also try to contact everyone to get their @#!*% on the chat ;)--

Close, all it has on it is the website's ads and logo, along with 'The Seraphim Chatroom for all members of the GW2 guild.'--

(Reset indent) Unable to get on that chat because it requires newest version of flash player and I have no rights install it to this computer I'm using. Mediggo 07:45, 15 September 2011 (UTC)

Multiple people not being able to use the chat is a problem. I'll try and discuss with our Tech. staff ;) --

The Seraphim is a guild that existed before The Seraph was founded by Queen Salma in 1079 AE.
Though lots of guilds may focus on the largest threat: The Elder Dragons.
We focus on everything ranging from Minor to major dangers.
Because what does defeating an Elder Dragon matter if Tyria is in Chaos.
We're not only focussing on fighting but also on storing knowledge which is taken care of by a special branch led by Ucco,
This Branch contains lore and information ranging from the gw1:Giganticus Lupicus till events happening this very day.
There also is a division focussing on crafting and cooking to supply our guild with Food, weapons and armor.
Last but not least there's an elite group that focusses on defending our territory by taking on other Tyrians and Guilds in events known as: World vs World vs World.
with more branches and divisions to come as we have lots of discussions going on between our top men and women.

We are a Guild, a Special Force, a Brotherhood.
We are the Protectors, the Guardians.
We are The Seraphim.

More information will come when infinite has finished the background story for our guild.
(I had more but internet issues caused me to lose a lot of information) --

Ok. I was just curious whether your guild was associated or not with Seraph or Kryta, because, well... you have pictures of Seraph on teh page. Anyways, thank you for information, I'm looking forward to your lore background. And saving the world from forces of evil, of course! Mediggo 10:57, 20 July 2011 (UTC)

Those Seraph Guards are there because A. I love their looks. B. because I haven't come to creating armors myself C. it's a placeholder ......Yada Yada Yada.... Z. They fit in. --

I am terribly sorry! I thought I had rearranged everyone by profession and alphabetically, but you must've disappeared during that process. At least you noticed, so it's all good now. :) - Infinite - talk 01:00, 24 July 2011 (UTC)

Also, I noticed you are still there with your guardian, rather than your mesmer. Is that still desireable or is this character replacing him? - Infinite - talk 01:03, 24 July 2011 (UTC)

Sorry, my mistake, I'll be removing the mezzie than...--

I know, but that character is already in a different guild!!! I misthought he was in this guild!--

we should really get more on there :P --

The Game's not even released yet and I'm starting something already.
I'd like to ask members (at free will ofcourse) to search and screencap the most beautiful places you'll be able to find in the world of Tyria.
These Screencaps which'll probably turn out to be art will be displayed in a Gallery which I shall create as soon as the first pics come in.
I know this won't really start up that fast as the game's not out yet but who knows, you might have seen something stunning already!
The purpose of this event is to capture the most baffling spots of Tyria! (one thing though, don't take it to an extreme level. players must be able to discover for themselves not knowing how the whole world looks like before ever visiting those locations. let's call these screens ''Teasers'' shall we?;) ) --

It'll be hard, sir-guild-leader-whattheheckshouldIcallyou sir! At first! Beautiful places will need to be carefully chosen, sir!--

Call me Centurion as that's what I am rather than a leader. --

Maybe you should try and search what a centurion really is, anyhow I will be the leader I just don't care what people call me at all and I find Centurion more fitting than leader. (BTW. if you think I'm no good leader you should try and ask my 6 year old guild ;) ) --

I was trying to talk in character but I guess it didn't work. :p I know what a Centurion is, though I find it confusing whether you're referring to actual Roman Centurions or the charr rank centurion. I'm sure you're quite capable guild leader, but Eadgyth may be harder to convince. She's just looking forward to the Seraphim, and meeting everyone, even if she doesn't admit it. Mediggo 18:01, 14 September 2011 (UTC)

A Bookah is one factor I will not calculate into any leadership equation. My genius functions where Bookahs falter. - Infinite - talk 18:13, 14 September 2011 (UTC)

Genius should, under no circumstances, be stressed or tied to meaningless deadlines. Basic, Bookah. Besides, I have a transmatter flask to perfectionize. - Infinite - talk 18:20, 14 September 2011 (UTC)

Ouch Ucco, outsmartened by a norn. the as far as I know first norn to enter our guild! ;) (sorry for the little misunderstanding Mediggo! )--

I apologize, but I, Prince Rurik the Third of the thrones of Ascalon, Kryta, and Orr, who be a sylvari, kindly sends in his resignation.

"I can no longer stand to see and be in a human dominated guild. I wish to resign. May sylvari rule Tyria!"

On the other hand, Ivan Victorovitch wishs to join, may he?--

We will mourn about the loss of our beloved Sylvari friend Rurik and Ivan Victorovitch is more than welcome to join our Ranks, so hereby a welcome to our newest member: Ivan! --

Thank you, Nero. I find your cause worthy. I hope I can be of assistance to all.--

ofcourse we don't mind we could use the souls ;) --

Welcome aboard, Fabian. And Holy, I hope you're speaking of souls strictly figuratively there... Mediggo 07:53, 21 September 2011 (UTC)

I was thinking of adding my name as well. I already have the userbox on my page(its been there awhile actually), but I don't see my name so I'll just put it. Let me know what I can do in my free time to help the guild!--BookofTyria 01:01, 20 November 2011 (UTC)

well than this is a late welcome to the guild! ^^ you're able to do multiple things to help the guild btw, one of them is spreading the word ofcourse but you could also come up with ideas, suggestions or even art! everything is possible when you're in The Seraphim, I'm on a horse. --

Art would be my thing only if I could either draw or know how to use pic editors, but since I can't do either I'll focus on advertising and ideas.--[[User:BookofTyria|<font color="green">BookofTyria</font>]] 18:33, 20 November 2011 (UTC)

I'm stealing this page's layout for The Archivists' Sanctum, until something better is found (it's nice and cleaaaaan!). Hope you don't mind. Konig/talk 17:02, 21 September 2011 (UTC)

To be honest my friend, you should ask Ike. he's the one who came up with this design.(I allow you though and I bet Ike will too) --

Allow? What silliness is that, "noble" sir. I did not say borrow or request to use, I said stealing. It is currently being used, and will likely be altered in the near future. Konig/talk 17:30, 21 September 2011 (UTC)

I would not call it stealing myself, but I "sampled" the layout for an experimental guild page today, too. It was just too pretty to be ignored. *grin* I made some alterations you might want to check out (e.g. removing the custom font (which is really hard to read, mates) and creating a "member" & a "guild" version. The later one has some collapsible character boxes. View the changes here: User:Gorani/Explore. --Gorani 18:45, 24 September 2011 (UTC)

BTW I forgot there was a custom font on the page! ;D (firefox doesn't show it) maybe I'll remove it later on. --

I would just like to know if we as the members of the Seraphim will be uniting as a guild in open beta for testing, PvP, and just because we can. If so, I am looking forward to seeing my Seraphim brothers and sisters in-game in a few days.--BookofTyria 21:03, 22 April 2012 (UTC)

A good question indeed, beta begins soon(again), hopefully the servers work again. Whom from The Seraphim will play beta and do we start it in beta? --AdventurerPotatoe ƸӁƷ 18:44, 27 April 2012 (UTC)

Thats whats the '(again)' was for. I couldnt play though, too many people or a crash or soemthing, I dont really remember. I just meant that the official countdown was soon and that I hoped they'd fix things by then. --AdventurerPotatoe ƸӁƷ 19:55, 27 April 2012 (UTC)

For the next beta I would like to join. I wasn't able to find anyone in the guild. If someone in can give me their character's name that would be great. My character's name is Nina Chin, lvl 17 necro.--BookofTyria 22:54, 16 May 2012 (UTC)

Hello my fellow Seraphim, As I woke this morning I struck my face with the palm of my hand in amazement of the lack of a guild emblem design! Of course we have our amazing emblem made by Ucco but the Guild Registrar refuses to copy this design. therefore I'd like to request a second guild emblem from you, our loyal companion.

Emblem designs can be submitted on this discussion page, to allow other members to judge and vote.
The Gallery of Guild Emblems offers you a list of the current designs.
you may use Photoshop or any similar program in order to mash 'em together or just post the combinations and colors below. 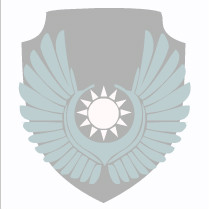 Yeah its crap, but I got bored, I used the colors similar to the original emblem. :) --Angelkiss

What world are we going to be on?? If it comes down to it, I'm going to probably vote for an EU server-regardless of the fact I'm in NA. If I may, I'd like to suggest Fissure of Woe....--

Fissure of Woe always seemed to be full, we're located in the Desolation. --

I'm in Far SHiverpeaks, because people I know IRL will be there, being from Sweden and all... I don't how this will affect the guild though. --AdventurerPotatoe 13:53, 29 August 2012 (UTC)

Biggest bunch of losers I've ever seen in my life. Sad.

I don't think I'm cut out for this guild, everyone in the guild is nice and all. But I prefer to be in one guild at the time, since everyone else is in multiple guilds I've decided to join a guild that doesn't allow being in multiple guilds. I'm still gonna keep names on my friends list though, and I will be happy to do dungeons or other stuff. I'm going to officially leave in a few days so everyone has the chance to read this message. --AdventurerPotatoe 15:00, 22 December 2012 (UTC)