First of all, thanks for updating and creating all those pages! As for this question, leaving it as the typo'd name is fine, as that's what players will be seeing in-game, and some might not even know that's a typo until they come to the wiki. When in doubt, always look at what the game does. Cheers! —Ventriloquist 08:30, 13 July 2016 (UTC)

Hey, do Undersea Wurm Filets still drop after you finish the collection? The food you can make with it seems to have a unique nourishment and it would be a shame to get the food only once. Tyndel (talk) 08:10, 28 August 2017 (UTC)

Where are you seeing this error out of curiously? I've found a few recently, and most were related to just not being up to date in formatting, so I'm wondering if that's what you've found. - Doodleplex 04:58, 20 September 2017 (UTC)

Well I *was* just seeing it on Mesmer mantras. I was gonna say "lookit there before I clear the cache!" but all the errors are gone. I saw it before on Portal Entre/Portal Exeunt, but I fixed those locally rather than fix the template.
The pages had a "the given value was not understood" error for Property:Has skill facts. --Imry (talk) 05:01, 20 September 2017 (UTC)

Based on the little I know of wiki-code, it sounds like basically just the pages themselves needed to be fixed not the template, but I think it might be best to shoot a message over to Alex to look into it either way. - Doodleplex 05:06, 20 September 2017 (UTC)

Right now it looks fixed. I was able to piece together that Template:Skill infobox was trying to put <nowiki> tags inside a {{#set: Has skill facts = stuffz}}, and those two don't like each other :( I'll give Alex a poke just in case I made things worse. Thanks! --Imry (talk) 05:15, 20 September 2017 (UTC)

Had to laugh. That's basically me when staring at our nomenclature. I know there's a rhyme and reason to it somewhere, but too often my brain is left wondering. G R E E N E R 08:36, 22 October 2017 (UTC)

Doodleplex explained it to me that historical means totally removed from the game, and discontinued means it may still be around, but no more will ever be made. SarielV

Mind you, I just went through the Historical Content category and shuffled a bunch of items over to Discontinued, so this hasn't been applied consistently in the past. There's probably a lot left to move. SarielV

Because in all honesty, I have a terrible sense of direction, so I never have a clue where they mean and usually don't ask cause I'm a chicken, so I figured you'd be safe to ask: Where exactly is "south/north" hills during Teq? And those are the only hills right? I want to put them on the page of common terms I'm working on, because I figure they're helpful to know for newbies/non-native English speakers but I can't without knowing the where. =x - Doodleplex 20:43, 10 November 2017 (UTC)

opens up GIMP
Right, so here's a map: 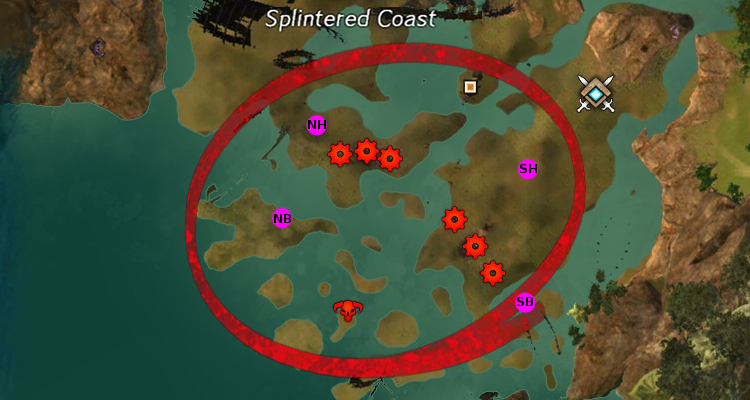 SH is "south hills", SB is "south boats", NH is "north hills", NB is "north boats". At each of these spots mobs spawn and go attack the turrets, so you need people to kill the mobs.
In general, you need 5 people for each spawn-spot. If you have 6+ then the spawns upscale and you get Champions (Champ Risen Grubs are VERY icky). There's usually a lot of people AFKing around the south turrets, so they usually upscale; so it's super important to have south hills/boats teams. On the other hand, there's usually no one AFKing around the north turrets, so you can usually have a single team take out both north hills and north boats.
That should be everything, I think? --Imry (talk) 01:04, 11 November 2017 (UTC)

Yay! You're welcome ^_^
For boats, I know that for south boats the mobs spawn inside a wrecked boat hull. I'm not sure how people decided that NB was south of NH - I mean, both spawn nearby some boat hulls but neither are in the boats, so ??? I guess that it was decided by some kind of symmetrical "let's copy terms from SH/SB!" process? --Imry (talk) 01:17, 11 November 2017 (UTC)

Every single time I've done NB I was where you labeled NH and no one was at the NB label. The ones that spawn at your NB label usually head towards Teq instead of the turrets so no one cares, or occasionally one or two in the group goes and kills them. I wasn't aware that ANYONE called that spot north boat --Gimmethegepgun (talk) 01:34, 11 November 2017 (UTC)

Really? I-- uh. Well I WAS pretty sure that I was right, but now that I think about it I'm not sure. I could've got them confused X.x But yeah, I'm still pretty sure I got them right. I can ask the next time I'm at Teq.
And yeah, the (what I call) NB mobs usually head over to Teq, but whenever I was on north I always went and helped kill them after I cleared (what I call) NH. I didn't know that people could just leave the mobs alone and they'd do nothing. Cool!
I definitely know that there used to be a (what I call) NB team, but I've been doing Teq since before HoT. The NB team could be a thing of the past. Like, with all the powercreep it's no longer needed. It could be like the "emergency response team" that ran around and killed fingers/mobs - that got powercreeped out of existence. --Imry (talk) 01:54, 11 November 2017 (UTC)

Honestly I thought north hills was somewhere northeast of the spawn near the boat and the turrets (similar to south hills) but it didn't do jackall and so no one cared, and that the mobs at your NB tag were ignored because they didn't do anything. Or something like that. Anyway I don't think I've ever seen anyone advertising for a north hills team (though I've seen north hills mentioned) while anyone looking for north boat goes to your NH tag --Gimmethegepgun (talk) 02:39, 11 November 2017 (UTC)

So, that's a bit of a conundrum isn't it. Technically, The Displaced Tower is the exact same thing as The Vizier's Tower, but in a different time (and distorted spacetime). Khilbron owned The Vizier's Tower, but not technically The Displaced Tower (as it is merely a copy-paste of The Vizier's Tower pre-Cataclysm). Thus why I typed "was", since in one point of view, it's one tower. So is it "the tower in timespace a and timespace b was owned" or is it "the towers were owned". Does it count as a separate entity (thus pluralizing) if it moves spacetime and technically exists twice in a singular moment of time? Konig (talk) 02:57, 3 October 2019 (UTC)

I think the bigger question is, why are we still including this trivia on Khilbron's page? We don't note that the Royal Palace is owned by Queen Jennah, though it certainly is. Viziers go in the Vizier's Tower, naturally. - Felix Omni 05:20, 3 October 2019 (UTC)