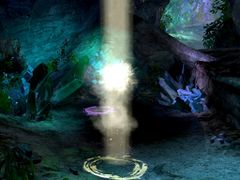 The Raven Shaman's Power Source is carefully tucked away in an upper cavern of Darkhoof Heights. The entrance is to the west side of the centaur village (see map in the side bar). The event Slay the evil Raven shaman, Vilnia Shadowsong, and her helper must be completed to access the hero point.

Fight one or two Ice Imps at the entrance. Once inside, stay left to find a series of jumps up a stone ledge (rather than go after the veteran Imp on the right.)

From there follow the ledge to the back and into the grotto where Vilnia Shadowsong resides.

Note that you can't just run/stealth past Vilnia to get to the area with the hero point; it's blocked off until you kill her.

This must be the source of the Raven Shaman's power. The very air vibrates with energy that raises the hair at the nape of one's neck.