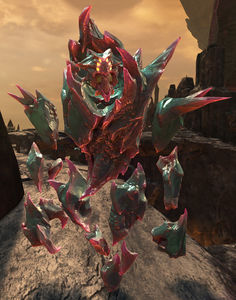 Four Jade Scouts appear during the confrontation with the Mursaat Overseer in Bastion of the Penitent, and slowly move to the opposite side of the board, capturing tiles they move over, and transforming into Jade Soldiers upon reaching the other side of the board. Occasionally they gain the Mursaat Overseer's Shield buff that makes them invulnerable, until it is removed by Dispel. Bringing their health to 0 will stop them temporarily, but they will regenerate to full health and start moving again.