Hidden chest (Stronghold of the Faithful) 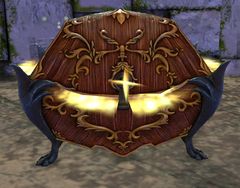 Three to four Hidden chests can appear in the Stronghold of the Faithful. Three are located in the maze of the Twisted Castle while the fourth Hidden chest appears just outside the entrance to the Fountain of Cleansing only if Glenna's rabbit is reunited with the other bunny after the Siege the Stronghold encounter (completing the Love is Bunny achievement). Only the chests within the Twisted Castle have a chance to drop the Bloodstone-Infused Ectoplasm, required for the Envoy Armor I: Experimental Armor collection. The chests can be looted once per week and the three in Twisted Castle will show up even in a cleared instance.

The following descriptions assume the Twisted Castle has been cleared.