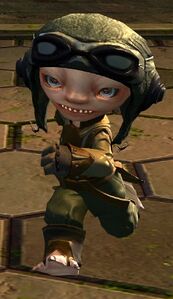 "Aviator" is an asuran child who is dressed up for Halloween. During Halloween he can be found wandering about the Lion's Arch and in Metrica Province watching "Mad King Thorn" performing.

In Lion's Arch
Trick or treat! Fair warning, citizen. It is in your best interest to give us all your candy.

Section-stub. This key section of the article is incomplete. You can help the Guild Wars 2 Wiki by expanding it.
Reason: Missing dialogue to give them candy corn and get bags back

In Metrica Province
My mother won't allow me to work in my lab until the Halloween celebration is over. Apparently, occasional frivolity "broadens the mind."

Not really. At first I was indignant, but I'm starting to think there's something to it. Certainly, this is a positive experience. Maybe I should be taking notes.

Only in Lion's Arch

By my calculations, I can expect a thirteen percent increase in goody acquirements this year.

How undignified! Do it again!