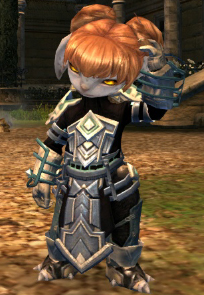 Traffa is in charge of destroying the asura technologies pirated by Uzolan. Traffa is an Errant Technology Disposal Operative of Rata Sum. According to Exemplar Talie of the Shining Blade, Traffa was sent to Caudecus's Manor by the Arcane Council. Her task is to dispose of stolen asura technology. Traffa shows enthusiasm in her field work but tries to hide it with a professional demeanor. She is a skilled demolitionist but admits that fighting is not in her equation. Scholar Magg notes her as being a genius in Blast Radius Theory and a former romantic interest.

Ka-boom! I mean, that will do nicely.
Oh, you might want to cover your ears.