Used to detect and dig up chunks of Brandstone that fall on Istan. Costs 3 Volatile Magic per 5-minute charge. — In-game description

Used to detect and dig up chunks of Brandstone that fall on Istan.
Costs 3 Volatile Magic per 5-minute charge.

The Brandstone Multitool is a gizmo that allows you to find and harvest Brandstones that fall from the sky in Istan. 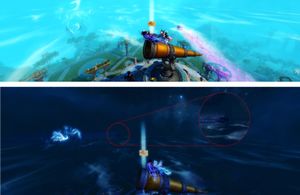 Brandstone meteorites flying visible from the large telescope on top of Astralarium. At night time it can be difficult to spot. 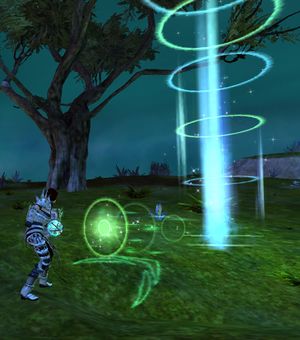 Follow the directional indicators (green in this image) until you find a pillar of blue light. Then use skill 2, then skill 3.

The Brandstone Meteorites fall roughly every 15-25 minutes. As soon as one touches the ground it lasts for about 5 minutes, whether someone finds it or not.

There's no map-wide notification. If the player is standing near the top of the Astralarium by the waypoint, it can be seen and heard coming through the sky, and Scholar Fatima will announce its landing.

Visually, meteorites look like a gooey purple puddle on the ground or occasionally a large crystal in a crater.

Using the Multitool item in your inventory will give you a special action skill and consume 3 Volatile Magic. Activating the skill while mounted will spawn a directional indicator that points to the meteorite if one has landed. Activating the skill while on foot equips the Multitool bundle, which is used to mine brandstone nodes. Additional skills, which upgrade the multi-tool, may be bought from Scholar Fatima.

Meteorite landings spawn a group of Branded Earth Elementals. Consider defeating these as well as other nearby enemies before mining meteorites. They interrupt meteorite farming. Along with these hazards, the meteorite impact sites apply Confusion and Impact Sickness to players standing on them. 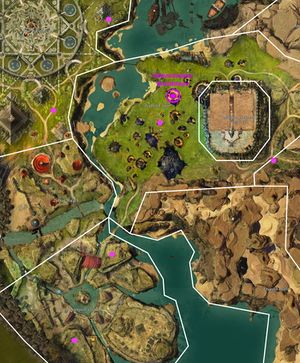 To mine the brandstones, use your special action key to bring up the Multitool skills and:

Occasionally, a meteorite that lands in the Plains of Jarin will spawn a large targetable Brandstone on the surface along with the event

Destroy the crystal encasing the Brandstone before it disintegrates (80). At this site, skills 1 and 2 will do nothing. Instead:

You can mine up to 30 brandstone impact sites per day. You can continue to mark the impact site with Impact Site Marker, but Brandstone Scan will not pickup any brandstone location.

Bug:
If the Destroy the crystal encasing the Brandstone before it disintegrates event fails, subsequent brandstone impacts in that map instance will be bugged. The Brandstone Multitool will not work on impact sites, and Scholar Fatima will not announce impacts.
Retrieved from "https://wiki.guildwars2.com/index.php?title=Brandstone_Multitool&oldid=2502166"
Categories: