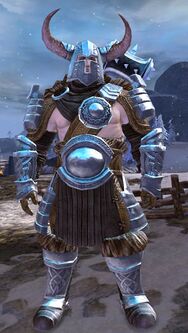 You'll want to get to the stands. It's not safe down here for the weak and untrained. Vicious, half-wild animals roam the grounds.

I'm not a spectator.

Could've fooled me. You don't look like much of a challenge. Talk to Kyrs. She'll tell you if the beasts are ready. Let's hope you don't fight like a spectator.

Why can't I just challenge you?

You're lucky I'm even wasting my breath on someone as green as you. It would take me longer to clean the blood from my hammer than it would to dispatch you. Defeat the beasts, then I'll let you face me.

I'll talk to her.

During Survive the trials of the battle pit
The beasts are salivating, they can smell challengers on the wind. The scent of fresh meat.

This will be no problem.

After the event, in the run up to Defeat Vollym, champion of the battle pit
Focus on the fight! Unless you want find[sic] your head at great distance from your body. Carried away in the jaws of a wolf, for instance.

When I'm through with the wolf, it won't be carrying anything very far.

After defeating him
That was good. Now, we need to vacate the ring. The spectators are here to see fighting! It's a raucous crowd. When you let them get bored, things can get quickly out of hand.

When available as a merchant
I went easy on you. It's not a show if I clobber you immediately. No suspense. But you gave the spectators a momentary thrill. As a reward, I'll let you buy supplies from our armory.

Let's see what you've got for sale.

Maybe some other time.