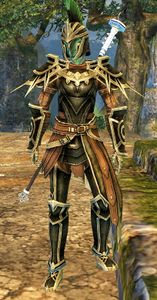 Vigil Crusader Jevaran is the leader of the Vigil contingent stationed at Fort Cadence in Sparkfly Fen. He has been tasked with protecting the fort due to its strategic value, guarding a choke-point that Risen coming from the Straits of Devastation must pass through to get to Lion's Arch and other northern settlements. He is also guarding a small team of Durmand Priory scholars, led by Scholar Yorix, of whom wants to attempt to break the curse on the pirates in hopes that they can be turned to allies in the fight against the undead, but Jevaran sees it as a suicide mission and refuses to devote resources to it.

Fort Cadence is free of undead for the moment. Take this time to heal. No doubt they'll return.

Why is this place so important?

The Vigil believes this location will be of strategic importance in the war. If we can pinch off the undead army's access northward, then we have a better chance of protecting the coast and Lion's Arch.

Have you seen a lot of Orrian undead around here?

There's a steady stream of them, as if they sense that we want this fortress. They're like animals, drawn to the vibrations of living flesh and the energy of concentrated effort.

Do you think you'll ever see the last of them?

If I didn't believe that, there'd be no point in fighting. Our only hope is that they are a finite threat, a threat that can be conquered. I just hope I'm alive to see that day.

Good luck with the fight.

We could all use a rest.

Starting Clear the Risen from the center of the ruins of Fort Cadence
We must clear the undead from the fort. We're still investigating whether it's safer to weave through the ruins to the north or kick down the front door to the south.

A sneak attack is best. I say we approach from the north!

You think so? All right. We'll go through the ruins to the north and sneak up on our enemies!

On second thought, we should do more scouting.

I prefer a direct assault. The south is clearly the best choice.

Before we move out, allow me to scout more.

I'm not sure. We should rethink our plan of attack.

During Clear the Risen from the center of the ruins of Fort Cadence
This blight's got me seeing red! Purge it! Purge them all!