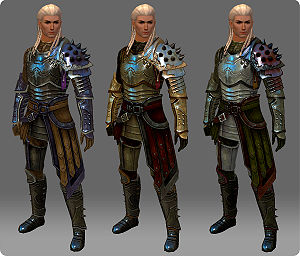 Dyes are a type of item that unlock colors for use in customizing your armor. Dye unlocks are account-wide, allowing all characters on your account to use any color you have unlocked.

New accounts begin with access to the Starter dye set, containing 21 colors. Additional colors are unlocked by first obtaining Unidentified Dyes or dye kits. Opening one of these will produce an identified dye, named for the color it unlocks (e.g. Emerald Dye); consuming this identified dye will unlock the color for your account.

If an identified dye has already been unlocked on your account, the item's tooltip will display a warning to this effect, and you will be unable to consume the dye.

Dye interface on the Hero panel.

The Equipment tab of the hero panel opens with a "paper doll" model of the character and, to the left, a set of three interface options: Equipment, Wardrobe, and Dyes. Selecting the Dyes option brings up the interface shown in the thumbnail at right:

1. Dye tools
Select from dye painter (default), dye remover, and dye picker.
2. Favorites
Shows your current favorite dyes.
4. Dye list
Shows all dyes unlocked on your account.
5. Equipment
Your currently equipped outfit and armor.
6. Dye channels
Shows the available dye channels, with current dye, for each piece of equipment.
7. Transmutation summary
Shows how many transmutation charges are available and how many the current changes will require.

The dye remover tool is used to remove dye from a dye channel and revert it to its default color.

Dyes can be added to the "Favorites" list by right-clicking on them, either in the dye list or in the dye channels area. To remove a favorite, right-click on it in the favorites list.

The dye list can be sorted by three different criteria, available by clicking the gear icon at the top right, to help you find the dye you want:

Hue
The major color grouping that the dye falls under: gray, brown, red, orange, yellow, green, blue, or purple.
Material
The armor material that the dye was designed for: vibrant, natural metallic, or natural leather.
Set
The rarity set that the dye belongs to: starter, common, uncommon, rare, or one of the dye kit exclusive sets.

Dyes can be previewed together with skins, managed through the wardrobe interface, allowing a player to completely customize the character's appearance before making any permanent modifications.

After making any changes, the transmutation summary will appear. Dye changes do not cost any transmutation charges, but if you have made any skin changes, their associated costs will be shown here. Clicking "Apply" will permanently save the dye (and skin) selections to your equipped items. Clicking "Reset" will revert all changes made to the paper doll. 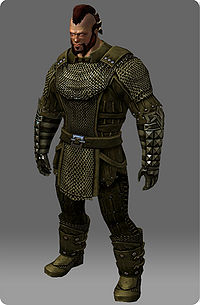 Each piece of this armor is dyed with the same color, but the results are dependent on the material (cloth, leather, or metal) which creates slight variations between different parts of the armor.

The final result of applying a dye to an item is influenced by the different material components of the skin — every dye has slightly different color codes that apply to cloth, leather, or metal. This is demonstrated in the screenshot at right.

There are 596 dyes currently available.