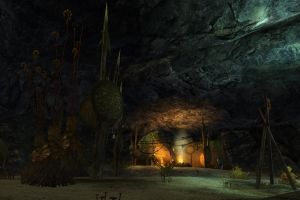 Home of the Togatl tribe.

The Togatl are as a part of this area as the lake or the sky. We have lived here for many generations. I never thought I would see the end of us in my lifetime. The krait have dealt us a blow.

The Togatl are a friendly blue and green-skinned hylek tribe found in the Viathan's Arm, at the Togatl Grounds. For several hylek generations, they were the only sentient inhabitants of the lakes. This ended within the past 50 years when quaggan and krait fled from the deep sea dragon in the Unending Ocean and made their homes at Moogooloo and the Krait's Larder respectively.

Due to the food shortage situation caused by the krait over-hunting the area, they are rude and will not talk to those who do not show they're friends of the tribe.

Since the Tower of Nightmares' fall, they have had to deal with the toxins within the lake, though being hylek they are resistant to such; however, the Toxic Alchemist is capable of poisoning the hylek, making them hostile to all and even changing their skin color to yellow.