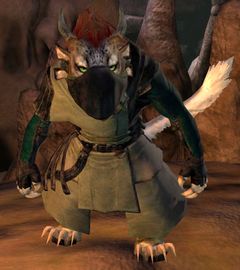 Scornheart is a merchant located in the Free Market, Lion's Arch. She was originally a karma merchant in Hooligan's Route, Lion's Arch. She survived the attack on Lion's Arch and was temporarily located to the Vigilant Hills as a refugee. After the battle for Lion's Arch, she was a karma merchant located in Vigilant Hills, and a regular NPC located on a ledge outside her former cave in White Crane Terrace with other displaced pirates due to a group of skritt that took over the Undermarket during their absence.