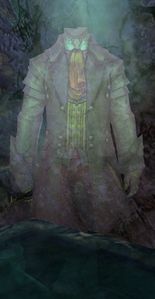 Lord Humphrey Faren was a noble, and victim of Mad King Oswald Thorn. He was named a traitor and beheaded for accusing Oswald of murdering his father in order to ascend to the throne. In death, he is accompanied by two skeletons who promptly behead him and laugh. He eagerly awaits the day King Thorn faces justice for his crimes. His ghost can be found in the Provernic Crypt in the last room in the mini-dungeon, inside the east nook by the doors, Scan Gaseous Field.

I am forever tied to Prince Oswald by bitter cords that wear upon my soul. And I promise you, one day, he will pay for his crimes against Kryta. I tried once, tried to bring him to justice, and failed.

I've heard this before. (if already have Mad Memoires VI: Coronation)

I'm patient. I can wait centuries for my chance to right this wrong.

I was out of my head with rage on the day of his coronation. I knew he'd murdered his father, and I publicly accused him before the ceremony. He had me put in shackles and made me watch as he was crowned.

What did he do then?

He made his first royal decree, proclaiming that all traitors to be punished without delay. He named me a traitor, and they cut my head off on the spot.

Thanks. I'll make a record of your story.