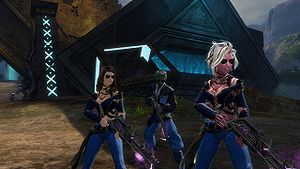 Several Assassins from the blue team.

Eliminate the opposing teams. Waypoint travel is prohibited, and will result in forceful removal from the Hunger Royale dimension.

Hunger Royale was the finale event for Beta Weekend Event 3, taking place in Metrica Province. For the event players were transformed into Assassins and split into four teams: Red, Blue, Green, and Gold with the simple goal of defeating the other teams.

The event's mechanics involved two major elements, limited resources and hunger. Assassins were given a rifle for their weapon skills but a limited amount of ammunition for the rifle's abilites, with their slot skills being filled out with rations as a healing ability and several utility abilities, all with limited uses as well. The hunger mechanic would cause the Assassin to constantly lose health, requiring them to eat the rations in order to stay alive. Supplies, including ammunition, rations, and the various utility items, could be found around the map however, allowing an Assassin to re-supply their skill bar and continue fighting.

Teleport could only be acquired by picking up a Teleportation Device found on the ground.