I know I've disgraced the Sunspears. I'm not worthy of the name.

Eladaar is a Sunspear found in the Jahai Bluffs. Her wife, Ysri, and son, Takar, were killed on orders of Palawa Joko. Her anger as a result of this event has not dissipated upon Joko's death and she now defaces the memorials erected by Free Awakened in the bluffs in an act of revenge. She has a home in the vicinity of the Ancestor Tree in the Ruined Procession.

Talking to her for the first time
Eladaar: Cleaning up this filth is a public service. Eternal life—ha! Serves them right.
Eladaar: No one gets eternal life. Least of all Awakened trash. Should have been buried a long time ago.

Don't you have something better to do? Get lost.

That memorial meant a lot to someone.

Mind your own business. Who do you think you are—my Second Spear?

After investigating her old house
Eladaar: You are here to mock me, huh? You an Awakened-lover too?
Eladaar: Took my family. Then they took my other family. Bonebags. Go away. Leave me alone. (grants Harsh Words)

Speaking to her again after
No, I don't want to see whatever trash you've found. Go away and never come back.

After placing the seventh Awakened Memorial, at Pact Vanguard
Eladaar: Bite a spearhead, outlander. Can't a woman ruin her eye paint in private these days? (grants Invitation)
<Character name>: There's something I think you'd want to see. North of Sun's Refuge, above the pool. It has to do with your family.
Eladaar: Ysri and Takar? You nosy, prying—why do you—
Eladaar: Kormir on a dolyak, I'll go. You'll pay for this if it's a trick.

Speaking to her again after
This better not be a trick, Commander.

I promise you, it's worth your time. 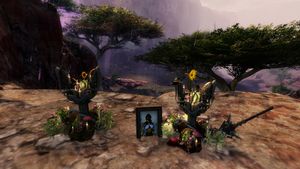 Approaching the two memorials at Venta Pass
Eladaar: Ysri...Takar...and that's Takar's toy... But how?
Eladaar: You! Awakened! Get out of here! This ground is sacred to the dead.
Amira: You had me build this for a Sunspear...? Nice trick, Commander.
Eladaar: You...made this? And the other one, that one looks familiar...
Eladaar: Oh no.
Amira: You. It was you! You tore them down! And you, so-called hero—never speak to me again.
Eladaar: I—I deserve your anger. But, Kormir curse me, I will make this right.
Amira: You can do nothing to make things right!
Eladaar: Second Spear Riyid, I know I've disgraced the Sunspears. I'm not worthy of the name. But please, hear me.
Eladaar: Awakened need a place to get stinking drunk and cry over their dead like the rest of us.
Eladaar: If there's some corner of the sanctuary...
Second Spear Riyid: Consider it done.
Amira: I'm...sorry for your loss.
Second Spear Riyid: Welcome home, Sunspear Eladaar.
Amira: The world feels empty without them, doesn't it.
Eladaar: I keep waiting for Ysri and Takar to come home.

Speaking to her by the memorials
Hate to say it, but thanks, Commander.

I'll do better. I am better than this. For Ysri, for her memory...

I believe in you.