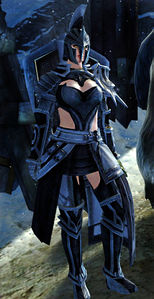 I can't take any more! I'm gonna bring this tower down and bury Markus in the wreckage.

Crusader Soma is a crusader of the Vigil found guarding the watchtower in Stromkarl Heights. She is a member of Captain Protmar's group, providing protection for the workers en route to Stromkarl Heights in order to build a watchtower and create a secure footing inside the ettin territory. Shortly after the tower's completion, Worker Markus begins flirting with Soma, even though she constantly rejected him. He eventually goes too far, enraging her and causing her to attack him and the tower. After she regains her senses, she apologizes and resumes her duties in guarding the tower and the various caravans in the area.

Escort and defend alliance workers sent to build a watchtower (55)

Bring the caravan to the tower (56)

Unless you have orders from Protmar, get lost.

If you had bad poetry shouted at you all day, you'd be at least as annoyed.

What would you prefer in your day?

Oh, look...I think Protmar is waving me over.

I see your point. I'll leave you be.

During the escort to Stromkarl Heights
I'm on a mission, not some idle stroll. I've no time for talk.

During the defense of the watchtower
Bear's teeth, I've no time to chat now. Help with this fight, or get out of the way!

During the caravan escort
Keep watch! We need this caravan to make it safely back to the tower.