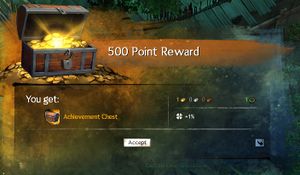 by earning achievements. Achievement rewards include an achievement chest, permanent account bonuses, laurels, coins, gems, and unlockable reward skins. Rewards are awarded for every multiple of 500 achievement points, except for the first reward which is obtained at 100 points.

Players may only receive a single reward per day. If multiple achievement reward tiers are reached but not yet awarded, the rewards will be throttled to one reward per day.

The next five tiers are displayed at the top of the achievements panel, listing both the required amount of achievement points as well as the included rewards.