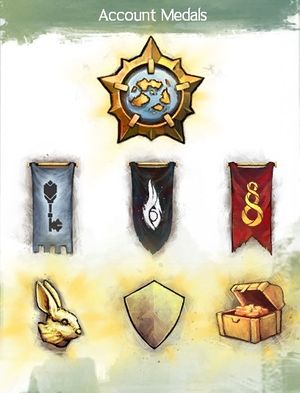 Account Medals were a display of various accomplishments your account had made on the character selection screen. Each customized icon varied based on the level of completion.

Account Medals were removed from the character selection screen in the October 23, 2015 patch for Heart of Thorns.

The World Completion medal denoted your highest map completion among all your characters. The medal was gradually uncovered as your world exploration progressed from 0% to 25%, 50%, 75%, and 100% completion. Hovering over this medal revealed the percentage of completion and a white indication bar representing the same percentage. To see how the medal was obtained, see map completion.

The Order Banners were arranged with the Durmand Priory banner left, Vigil banner center, and Order of Whispers banner right. Banners displayed when any of your characters completed initiation to that order. To obtain a particular Order Banner your character had to first join an order in their personal story at level 26. That character had to then become fully initiated into that order by completing his / her level 40 personal story as follows.

The PvP rank medal represented your current structured PvP rank. The medal changed when you achieved the appropriate rank. Hovering over it displayed your current title and rank points.
"Increase your rank by participating in PvP matches."

"Kill enemy invaders in the World vs. World battlefield."

The Legendary Treasures medal started washed out and revealed to be a chest once you account bound a legendary weapon. Hovering over it displayed what you needed to do to complete this medal.