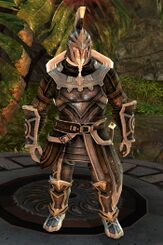 Tactician Dutch is a norn Vigil member of the Pact found at the First Central Checkpoint, a Pact camp located in the Toadstool Mire. He updates players about the current status of the the assault.

[Group Event] Gather around Tactician Dutch for a head count (80)

Commander! You're a sight for sore eyes.
(During Gather around Tactician Dutch for a head count)

Update me. How's our manpower situation?

We've got reinforcements coming in all the time. I'm thinking about sending some of our forces forward.

Let's gather enough support before we launch an attack.

Mordremoth grows stronger with every moment we wait, Commander.

Without sufficient forces, were doomed before we start.

Understood. well move when we have enough troops.

Good. I need to ask you something else.

I see, thanks for the update.

At ease, soldier. Where did you get the cannon?

We salvaged them from the airship wreckage. They were severely damaged, but they work.

Will they be enough to hold the camp?

The cannons still pack a punch, but their range is severely limited due to the damage they sustained.

But are we secure here?

We're good unless the more powerful Mordrem show up. The cannons can't even dent those monsters.

We'll make dow with what we have, and we'll hold the position.

Good. Let me ask you something else.

Indeed you will. Keep up the good work.

I see. Thanks for the update.

Keep up the good work.

Good to know. Carry on.

What is the status of the assault?

We're almost ready, but arming the troops is taking longer than we expected.

We have men but not weapons?

We had to salvage most of the gear from the wreckage. A lot of it is damaged, but it's what we have.

Here's the question: can they fight?

Commander, we're the Pact. Give us a bent butter knife, and we can slay a horde of Mordrem.

Let's talk about something else.

That's the spirit! Carry on.

We'll make do then. Carry on.

I see. Thanks for the update.

(During Retrieve engine parts to keep the cannons online)

Section-stub. This key section of the article is incomplete. You can help the Guild Wars 2 Wiki by expanding it.
Reason: Missing preparation dialogue

(During Help Grumlukl create his bombs)

Section-stub. This key section of the article is incomplete. You can help the Guild Wars 2 Wiki by expanding it.
Reason: Missing preparation dialogue

(During Defeat the mushrooms to rescue the trapped Itzel)

Are there any other forces we could call on? Any allies

There are some Itzel out in the jungle. We haven't been able to get their help, but maybe you could convince them.

Which way to the front?

We've been successful in the assult so far. Follow the main trail until you find the forward units.

How will I know I'm at the right location?

Our units will be there. Plus, there will be hordes of Mordrem.

What's your role in all of this?

Very well. Let me ask something else.

Keep up the good work.