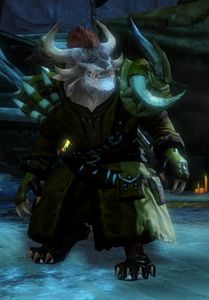 Nice try, Mr. Fancy Pants, but we only fight for gold.

Sharn the Vindictive is a charr pirate in Desmina's Hallows who claims to be part of the Pact while searching for valuable items. When Marshal Trahearne and the Pact Commander were searching for the map of the ghostly Captain Romke in 1325 AE, they ran into Sharn only to notice several Risen appear on the beach as well. Sharn and his fellow pirates chose not to aid the Pact without being compensated for their efforts, however, and left them to deal with the Risen by themselves much to Trahearne's disappointment. He later tried to obtain a large pearl from a Giant Risen Clam, and tricked Pact soldiers to assist him, but was ultimately eaten by the clam during a gloating monologue.

Escort Sharn the Vindictive to retrieve a giant Risen pearl (80)

Hey, we could use your help! We've been trying to reach a magic pearl that'll help the Pact fight the Risen.

What part of the Pact do you belong to?

You know, the fighting part. We need these pearls to power our magic weapons. So, you going to help, or what?

I don't think I'm onboard with this scheme of yours.

Sorry, you're on your own with that, uh, mission.

During Escort Sharn the Vindictive to retrieve a giant Risen pearl
Keep an eye out for the accursed Risen and anything that looks like it might be valuable.