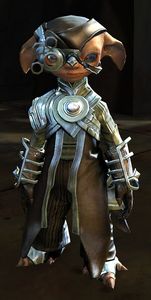 Researcher Cort is a scout in southern Metrica Province who alerts players to activity among the labs in Akk Wilds.

There's some very interesting research going on in the Akk Wilds. Doctor Bleent, as he insists on being called, has been distilling a drink from oozes, much to the chagrin of local peacemakers. Hrouda, specifically, is investigating Bleent's suspect practices. Also, Parnna has been reconstructing a gate that she thinks will give access to an ancient transfer chamber. Quite exhilarating, really.

Thanks for helping some area researchers with their vital work to incrementally grasp the scope of eternal alchemy.

When you put it that way, I feel significant.