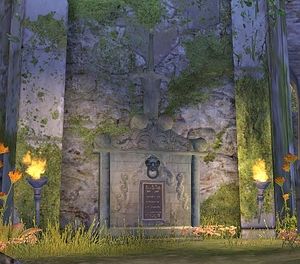 Tomb of the Unknown Soldier

Gravestones are markers placed over the final remains of the deceased. They often have inscriptions with information such as the departed's name, date of birth, date of death, along with a personal message or favorite saying. They are found close to towns and cities or in secluded forgotten locations.

Most gravestones found throughout Tyria are Static Interactive Objects and the players can have but limited interaction with them.

Gravestones are often placed together in a group inside a cemetery. Some towns in Tyria have large public areas for the interment of the dead. Gravestones, Crypts and Mausoleums together with statues and other memorials make these places honored and dignified final resting places. Places containing noteworthy cemeteries: