The Giving Tyria a Voice behind-the-scenes video premiered on 16 November 2009. It accompanies The Races of Tyria trailer and features interviews with four of the actors who voiced the five heroes of Destiny's Edge —Troy Baker as Logan Thackeray, Steve Blum as Rytlock Brimstone, Felicia Day as Zojja and Kari Wahlgren as Caithe, excluding Jocelyn Blue as Eir Stegalkin. 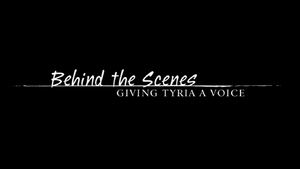 Troy Baker: "The thing I like about Logan is that he's really a hero, but he's the kind of hero I like to play because he's got this dark past, this pain that is actually coming and compelling him, to be a bigger hero than he ever thought he would be."

Troy Baker: "It is a different creature all by itself. I mean, I've done different creatures, I've done TV, I've done film - small films and big films. The thing what I like about voice acting is that it's non-physical. It has nothing to do with how you look, how old you are, or what color your hair is. If you look similar to the other character you're playing opposite..."

Steve Blum: "He is a member of the charr, and the charr are a warring nation, and he is sort of thrusted to this situation where he is in the alliance from a guy on the other side. He is this guy who for his whole history and ancestry is been known to fight on one side, and all the sudden, he has to open up and see how it's like from the other side, and there's a certain degree of respect and awareness that comes with that."

Steve Blum: "Game voice work differs in I think, mainly because the quantity of lines and the depth of the character. When we're working in something like animation, or even commercials, we get snippets of time for those characters and we're working with other actors. In the game world, typically, we'll be working in a room by ourselves and just blasting through lines and really digging deep into the character psyche, and even fleshing it out, but very quickly."

Steve Blum: "Technically, it can be a lot more straneous on the body. But in a way it does have a cinematic sort of an appeal to it as well, because we do get to see the full spectrum of that character."

Felicia Day: "My character is Zojja. She's an asura. She's a tiny, adorable girl, and she's cute but she has a very snirky attitude, and she thinks she's better than everybody, so that's kind of fun to play. When somebody tries to correct her she gets very snappy, 'cause I don't think she will acknowledge that anybody knows more than she does. I always picture her as a kind of a book worm, and very intellectual and talented. Always very precocious."

Felicia Day: "This is my first video game so I was thrilled to be able to be called in for it. It's not like it's something I do on a regular basis, so it's quite a thrill. Voice acting is different. It's only your voice, so you can be inhibited about it. You're communicating everything through what your voice sounds like, because nobody has a picture to go with it."

Kari Wahlgren: "My character in Guild Wars is named Caithe, and she's a first-born sylvari, which is kind of like an elf character. She's very mysterious. We're not quite sure whether she's good or whether she's evil. But she seems to pop up throughout the game with information and no one's quite sure how she's got it. I like the fact that Caithe is a kind of a tough, warrior chick. I always loved playing characters that are good in battle. And she's blond, so I guess sort of identify with her in being blond."

Kari Wahlgren: "The intensity is usually very high, and when you get to the battle sections, all of those grunts and fight sounds and death sounds... we're doing all of those, so it can be really intense work."

Kari Wahlgren: "It takes a lot of energy, it sometimes can really rip your throat up, but it's very rewarding and it's really fun to see how it all turns out in the end."