Defeat Orma of Modus Sceleris is a variable level event that occurs in various locations. Orma usually lies in wait disguised as a merchant, Ooshanu, Melinda Fairmoor or Brewmaster Burna, near a cart, offering Triple-Luck Tonic for sale. Examining the bottom of the cart to note something suspicious and then talking to the merchant will reveal Orma, who will attack. The fight can also be started by buying one of her tonics, drinking it and then talking to her.

The event is triggered by inspecting bottom of the cart or drinking Triple-Luck Tonic and then talking to the merchant.

Orma starts by disappearing and summoning 3 clones, recognizable by the fact that they are not veterans like her. After defeating them she appears with an Invulnerability effect for a few seconds where she taunts the player, before fighting.

Orma employs the use of many mesmer abilities, such as creating clones, casting Chaos Storm, and utilizing Chaos Armor. She can also create an area of effect singularity, which will slow the player for a couple of seconds, and then pull them if they remain in the area.

When defeated she stops being hostile and can be talked to. A chest called Modus Sceleris Supplies also appears in place of the merchant's cart on successful completion.

Orma and the chest will remain for a short while, before she respectfully bows and teleports away. 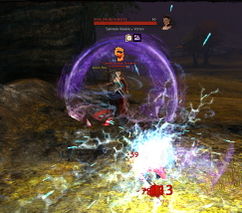 After beating her clones
Orma: I put all my money on number three!

After beating her
Orma: Well played. Next time I'll make sure the odds are in MY favor.